During the weekend I made the trip over to Nova Scotia in Canada to run two stages of the Cabot Trail Relay as part of the team "Seventeen Runners",  couldn't ask for a nicer invitation.

First thing is first, I've learned two things from the weekend.
1. When they say gentle slopping hills, they actually mean hills worst then the hell of the west in Connemara.
2. The atmosphere during the Cabot Trail Relay is great, its basically a constantly moving party!

So early start and although I missed the start of stage one we started off around 9am, the plan was basically to leap frog the entire trail throughout the next 25hours or so to support our team with water etc.

We weren't on our own however as we had three other cars on the road leapfrogging to make sure people got picked up from finishes and people were ready for the start of their stage.  In total we had 17 stages to complete and 14 runners to do it.

My first sight of the really big hills on the course was stage 4 (see photo below) which one of my cousins took on, this stage included a climb of around 320metres over 2.1km which as we drove up to it started to make my wounder to myself about agreeing to do stage 9 and if it really such a smart idea after all, too late to back out now though!
My next encounter with insane hills was stage 9 which another one of my cousins was taking on, this included a 385metre climb and then approx a 385metre decent on the other side, total of 17.5km.  Even though it was around 17c most of the day there was snow on the top of this hill. This was the highest climb on the course and it was pretty serious.

So during the day we continued leap frogging and supporting our team and others with stereo speakers tapped to the roof of the car and a large LED scrolling screen with different messages :) 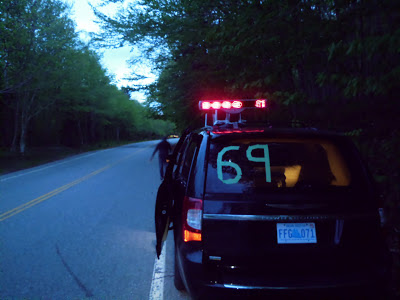 Stage 11: - Garmin Link
My first stage started at 11.03pm on Saturday night, this initially started off with a climb for the first 5.8km. It then involved a decent of 460metres to bring me back to sea level, but after descending I first had to climb two more hills before the finish.


My initial perhaps slightly ambitious idea was to complete the 14km in 1hr or less using the descent to gain as much speed as I could and then take it easier for the stage 13 which I'd then be starting at 2am on Sunday morning.

I started off pretty fast but I did suffer with muscle pain during the decent, in fairness I'm not used to hills. My mile laps broke down as follows:

As you can see from my laps and pace (below) I faltered on the last two laps and actually ended up walking as the two climbs with such a large decent basically thrashed my legs.

However, even with the walking on the last two laps I still managed a respectable 18th place out of 71 so I was thrilled with that.

Oh and talking of the large LED scrolling screen, here's what the guys had written on it for my stage 11 :)

Stage 13: - Garmin Link
So with my legs thrashed I got to change socks, get a very small amount of food, some water and a rest of about 1hr before I had to run stage 13.  Stage 13 as you can see from my previous blog post is described as gentle slopping hills.....yeah right!

It did include some relatively flat parts but it just seemed to me to be endless drags during which I was climbing, But yet looking at the elevation on the garmin I guess the effect was down to my legs being thrashed as it wasn't all that hilly.


My original aim was to run stage 13 at a much slower 8:30min pace but this went out the window for me at mile 3 as I knew I couldn't keep that pace for the rest of the stage as my muscles started tightening alot and I had to stop and stretch.

Near mile 7 this happened again but this time when I went to stretch my muscles started to spasm so I knew the rest of the stage wasn't going to go to very enjoyable, after this I took on a run/walk strategy which worked reasonably well as I also had hills to content with. 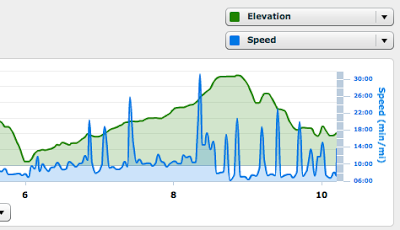 I stayed with two people from different teams for perhaps 1mile at one stage but eventually I had to stop and walk again as I was in agony, however I then started picking up the pace alot more anytime i started running after walking.

This allowed me to pass one of the two people just before the finish line dispite the fact they had been perhaps 500-600metres ahead of me at one stage.   I finished 48th out of 71.

Overall a seriously enjoyable event and I'd do it again in a heartbeat, the only difference I'd make is to space out the stages more so instead of doing one stage and then having approx 90min before the next I'd like maybe 7-8hours.


So what is my conclusion to the event?
Without a doubt I really need to work on hill work, that is a problem as where I live isn't particularly hilly but its something I'm certainly going to have to work on and its worth improving on as it will benefit me over all.

Oh, one last thing I forgot to mention, the teams can volunteer to cover water stops so with this in mind the teams tend to choose a theme for them, themes I saw included Superhero's, Christmas, Starwars (stage 13....nothing makes you chuckle more when you're banjaxed going up a hill then a stormtropper handing you water) and the village people (see video/photo below) 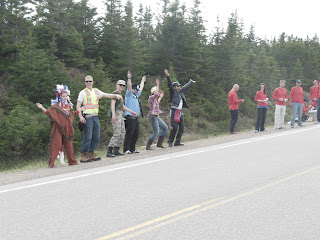 So, what exactly do I need for a two legs of a relay in another country that's far far away?

The answer, not alot in my case!

I'm keeping packing to a absolute minimum as I want to carry everything hand luggage for ease of on/off planes and more importantly my running gear has to be with me as I'm not taking any chances that it'll go missing!

So off I go this evening, over 15hrs of traveling and I'm back in a few days. I'm going to be so jet lagged :)

So I got a pretty big surprise the other day when I was asked to take part in the Cabot Trail Relay Race in Nova Scotia, Canada.

The race is 185 mile/276.33 km 17 stage event beginning in Baddeck, Cape Breton, over steep mountains in the Cape Breton Highlands National Park, through many small communities around the famous Cabot Trail.

The race is on the weekend of the 25th - 26th May and I'll be running two of the stages, the first of which includes over a 400m drop and the second which is relateively flat, both will be at night so sadly I'll miss the views.

The elevation profile for the race can be seen below, some serious climbs that make the hell of the west in Connemara look easy in comparison: (click to view larger image)

My two stages are 11 & 13, as you can see the initial climb and drop in stage 11 is impressive. By comparison stage 13 is a handy number. More details on both of these are below: 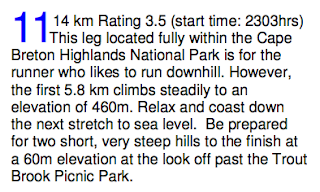 This interrupts my training somewhat for Portumna 50km but I couldn't pass up the chance and it looks to be a seriously enjoyable event. So here's looking forward to it! :)
Posted by Barry at 1:01 PM 1 comment: