Since the Dublin Marathon I've done very little running as I've not felt 100% but none the less  I still perhaps stupidly wanted to back into some sort of routine, I'm also thinking about what I want to do in 2023.

I have a 50mile Ultra in May which was postponed from last May but I need some events between now and then both to build upto but also to push myself in my training.

So this week I started on just easing myself back into running, no fast paces and instead focusing on keeping a low HR. Over the next few weeks I'll work in intervals to bring up the pace to my normal range (7:30min/mile range).

Tuesdays run was much, much more effort then it should have been and as the week went on I wasn't feeling great, Thursday night I didn't sleep well at all and throughout the week I had a higher resting avg HR of 47 instead of my normal of 40.

I woke up on Friday morning and felt rotten, I was also 99% sure I had a chest infection and after a GP visit all was confirmed and I was put on antibiotics and steroids.

So basically no running until that course is finished, not a great start and frustrating as I've not had a chest infection in years which I've mainly put down to running and improved fitness.

Email ThisBlogThis!Share to TwitterShare to FacebookShare to Pinterest
Labels: 2023, 50mile, back in it, illness, plans, ultramarathons

But fast ward to March 2020 and the world changed and we had a worldwide pandemic, I was still running and I even clocked up some very good runs like a 3:45 marathon around a 220metre loop by my house and a 40mile run from Kilkenny to Tramore, Co Waterford.

But despite the good condition I was in throughout 2020 there was only a virtual Dublin marathon which I did and I also did the half-marathon on the same weekend because I signed up to both but didn't see that they had to be both completed the same weekend!

Coming into 2022 I was in great shape and had a number of races lined up including a 50mile Ultra in May and the Cork marathon, I started the year off with the Ballyhoura moonlight challenge in January and then I got covid and the rest of the year has basically been a write off.

When I had Covid it didn't really effect me symptom wise massively but after I was completely wiped out energy wise, even doing a 1mile walk weeks after would exhaust me. When I did get back to running doing a 3mile slow run felt like doing a 15mile fast run. The effort was crazy.

Things have improved bit by bit but I find I have good and bad times energy wise so Dublin Marathon was never going to be a goal race anymore. Instead my aim was just to run it and treat it as a long run and maybe manage it in 4hours.

After the hectic week I had with Daniel being sick the week before and then a trip for work this was always going to be "fun"!.

As usual it was a early start for the drive to Dublin and I parked in the usual spot, headed off to the start line and on the way met some familiar faces which is always nice.

I had tried to avoid the baggage area since I didn't intend on dropping a bag but I did have a race vest on me. Unfortunately I wasn't able to do this and when I went to go through the area one of the staff refused me entry saying I couldn't come through with my bag. I explained it was a race vest and not an actual bag and I'd be wearing it running but they weren't having it. 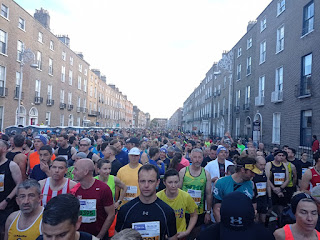 After explaining it a number of times and also explaining there were literally other people wearing them passing by they still wouldn't allow me pass and they eventually said they'd have to talk to their supervisor after a min of back & forth.

The supervisor took and look and let me through so it does seem like there's a knowledge gap given how common running vests/packs are these days.

Annoying but once that issue was addressed I headed to the start line and even though I was aiming for 4hours ish I headed off between the sub 3:20 and 3:30 groups and off we went.

I kept a comfortable pace and now and then got chatting to people, I actually kept a decent enough pace with the 3:30 pace group only passing me at around mile 15. But by around mile 20 I was flagging energy wise and I knew the idea of a 4hr marathon might not happen.

Unlike other Dublin marathons where I was focused on my own race I did my best to encourage others in the last few miles, especially in the last mile and I eventually crossed the finish line in 4:12:16.

Not my fastest Dublin marathon by any stretch but given I decided to do it as a long training run it still had its use. Another top and medal for the box.

It's certainly not been the year I had planned. 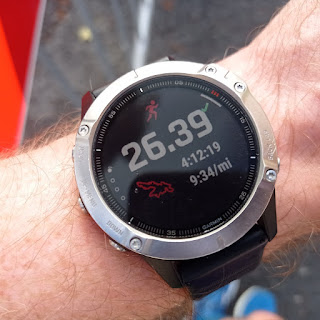