uggghh my legs!
For most of this week my legs hurt after last weekends adventures on Mt Leinster, on Sunday & Monday my legs felt like it was the day after the Connemara Ultra which was really, really odd.

My legs don't hurt anymore but they still do feel abit heavy, still managed to get a few miles in during the week even if they weren't the fastest.

For the weekend I plan on a long slow run for Saturday and I have thoughts about trying to run Slievenamon on Sunday at some point...all 721metres of it!

Overall the miles had slightly increased last week but still taking it easy, the week consisted of:

I won't lie, after the half marathon in Clonmel my legs felt pretty heavy last week and until the middle of the week I felt like I had a lack of energy in them.

Eventually after rolling them and doing some strides I must say that by Thursday they felt alot better but I was still a little apprehensive in relation to my plans on Saturday....which just happened to be a 21mile run on parts of the South Leinster way along with a climb and descent of Mt Leinster with some of the lads from Co Waterford.

I've actually been meaning to walk up Mt Leinster ever since I started hill walking back in around 2008 but I just never got around to it.  So here I was finally going to run it....well even though I was supposed to run it I still pretty much ended up walking the entire way up on Saturday but I did enjoy the trail run on the way back down.

Overall I seriously enjoyed the trail running part of the day as up until now I've done very little of it, I certainly plan on going back and doing more of it and I certainly plan on being able to run the entire way up to the top of Mt Leinster without walking! 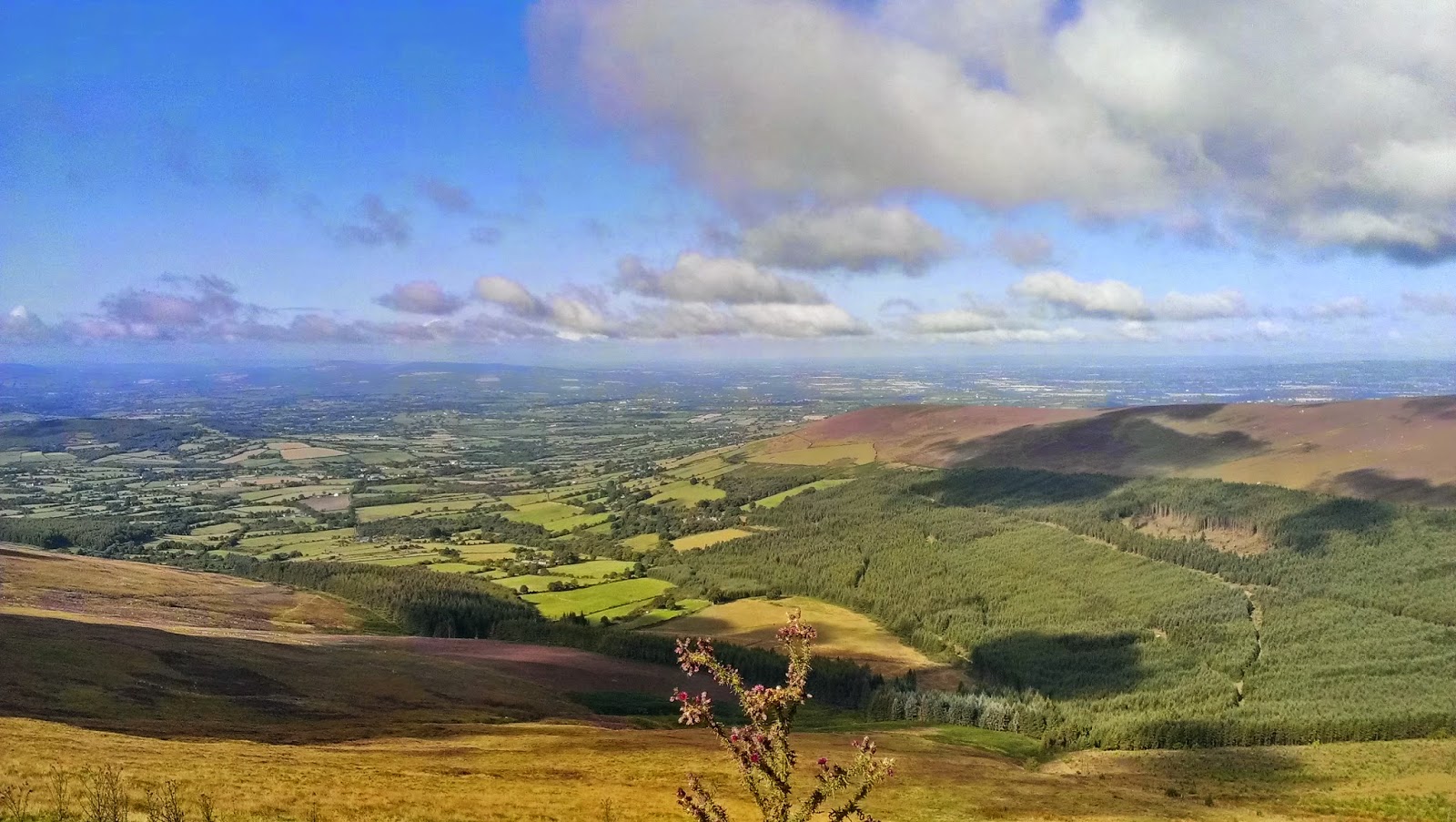 I might also start adding some trail running on Slievenamon (as its closer) to my weekly training as it certainly can't hurt to add some challenging climbs into my training and it also can't hurt to have some fun on the way back down.

Finally, it was good being able to run with a group on this long run. Especially as I likely would have got lost on parts of the trail....though that didn't stop us getting lost anyway! :)

So I had a pretty easy going week before running the Clonmel Half on Sunday, still I managed more miles then last week even before Sunday so that's a good sign that I'm feeling good and the miles are increasing.

Miles this week consisted of:

The plan had been to run a new PB of sub 1:30 (all going well) in Clonmel however my body had other plans and as such I ended up sick from Wednesday onwards...eventually things got better but this was yet another factor that I was aware of for setting my new PB and it made me even less hopeful.

Sunday arrived and I figured I'd aim for it anyway with a secondary goal of beating my PB by 1second or more.    Off we went and I knew instantly the race was going to be a challenge as we ran against the wind and up the hill away from Clonmel.

After the initial climb out of Clonmel I settled into a nice pace for a downhill section but after a short while I found myself struggling abit after the first mile and from around 4miles on I found my legs felt awful heavy and lacked any real energy.   Although it was still early on in the race I figured at this early stage I might as well resign myself to a finish time of between 1:34-1:45 and I'd instead treat the rest of the race as a long run for the weekend.

In many respects it was nice to just take it easy for a chance during a half marathon as its the first time I've done it and I've never paced a half marathon race either. However I was still lacking energy and I alittle struggled again at mile 8 and I just decided to walk abit on mile 11 and mile 12 as I just didn't want to take any more chances.  I did however pick up the pace for the last 200metres at the finish.

Its way off my PB of 1:34:43 but I supposed considering I had given up on any PB or a decent time by mile 4 and I walked towards the end it wasn't bad overall.   Overall I think I can put the poor result down to a mixture of not having the best training of late, the though course in Clonmel and being sick just before the race....perhaps in hindsight I shouldn't have ran it I guess. :)

As always there was a good feed after the finish with plenty of cakes and sandwiches etc, also one thing I found different is they were handing out milk at the finish line which was a nice change from the much more common Red Bull muck.

The milk was Avonmore's new gimmick protein milk so it basically tastes like low fat milk which isn't great when compared to full fat milk but its still a better alternative to red bull, I think I'll stick to drinking normal milk and the occasional chocolate milk. :)

Working up to the Clonmel Half Marathon

So although I'm back from holidays a few weeks and I've done two long runs (12 miles at 7:30min pace & 20miles at 8:40min pace) I've tried to properly started back into training from last Tuesday with a recovery run.

As I mentioned in my last blog post last week I entered the Clonmel Half Marathon which is on the 17th August, initially I had been planned on a sub 1:30 time for this but as I've missed out on a good bit of decent training/speed work I'm not so hopeful.

This compiled with the fact its a hilly course means it'll be a challenge to beat my 1:34min time set in Waterford in December.

I had planned on a LSR on Saturday but didn't manage to fit it in and I had a wedding to go to in the evening so the evening wasn't an option, on the plus side the wedding was good craic :)

Going to take it easy enough this week so I'm well rested for Clonmel.

So during the week I noticed there was alot of talk about the Thames Path 100 in the UK which is on in May 2015 and after some encouragement I decided I'd bite the bullet and I sign up.

For sometime I've wanted to do a 100miler but there's a distinct lack of them in Ireland outside of the Connemara 100 which is on this weekend in Co Galway.     Unfortunately I'm not in a position to take part in it this year due to other commitment and I also don't think I have adequate training done for it either so it wouldn't be an option until August 2015.

The downside is while Connemara is a beautiful part of the country the Connemara 100 is also a very hilly course so it certainly would be a very challenging first 100mile event to take part in hence my reason for opting for the Thames Path 100 instead.

The Thames Path is from London to Oxford in May 2015 and it follows the route of the river Thames, overall elation is no more then 900 feet so its basically flat the entire way......which should help!

Its a long way off yet but I can't wait and it should be some experience :) 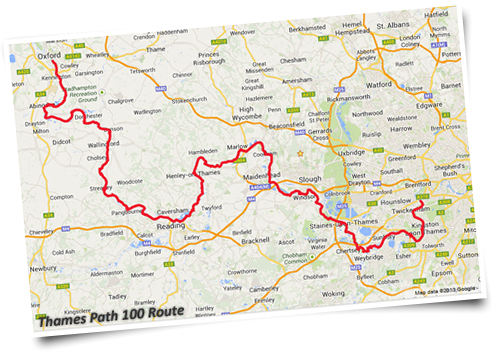 On a side note I must say huge amount of respect to Aoife O'Donnell who is taking part in the Connemara 100 this weekend, last month she became the first Irish women to finish the Badwater 135 in Death Valley. Seriously impressed that so soon after she's going to run Connemara 100.

Her race report from the Badwater 135 is available on her blog, it's well worth a read.
Posted by Barry at 1:37 PM No comments:

The blog has been quiet the last few weeks as I've been on holidays in Majorca and also been very busy car hunting as the car broke down on the way home from the airport.     None the less Majorca was a nice bit of rest and relaxation but that still didn't stop me getting some runs in! :)

For the two weeks I was staying I managed a run Port De Pollenca which is a straight enough run on a flat main road but it gets sort of boring so to shake things up abit I decided I'd mix in some hills and instead take in one of the coast roads that started near the hotel.

When I first started off on the coast road I could see what looked like a light house around 6-7miles off in the distance however I later found out this was inside of a military area which was restricted and I couldn't get past the gates so I never did managed to run to the light house like I had originally planned...shame.

So instead I decided to head up one of the mountain and see what the route was like....it was very steep but it had some cracking views!

Over the two weeks I did abit of running on the coast road and also tackled the mountain a few more times, during the last run before we left I met some local runners going up the trails and they made the whole thing look so so easy as they stormed up the trails.

Overall it was a nice break and as well as getting in some miles on the coast I also got in some miles kayaking which was great fun, nice to be back home with the cooler weather though :)

Now back into training as I have the Clonmel Half Marathon on the 17th August,