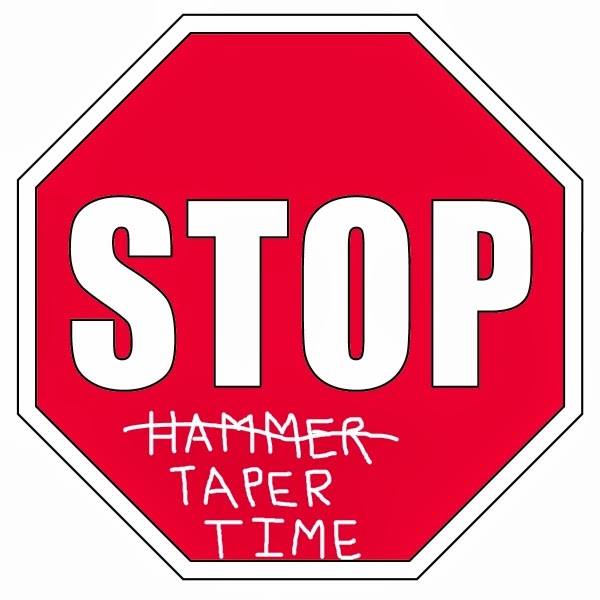 Taper madness is setting in good and proper, very low mileage last week in the form of:

Could feel things weren't back to normal for the first half of the week after the Mallow 10mile race as my heart rate was a little higher then normal.    However, things are returning to normal again now :) 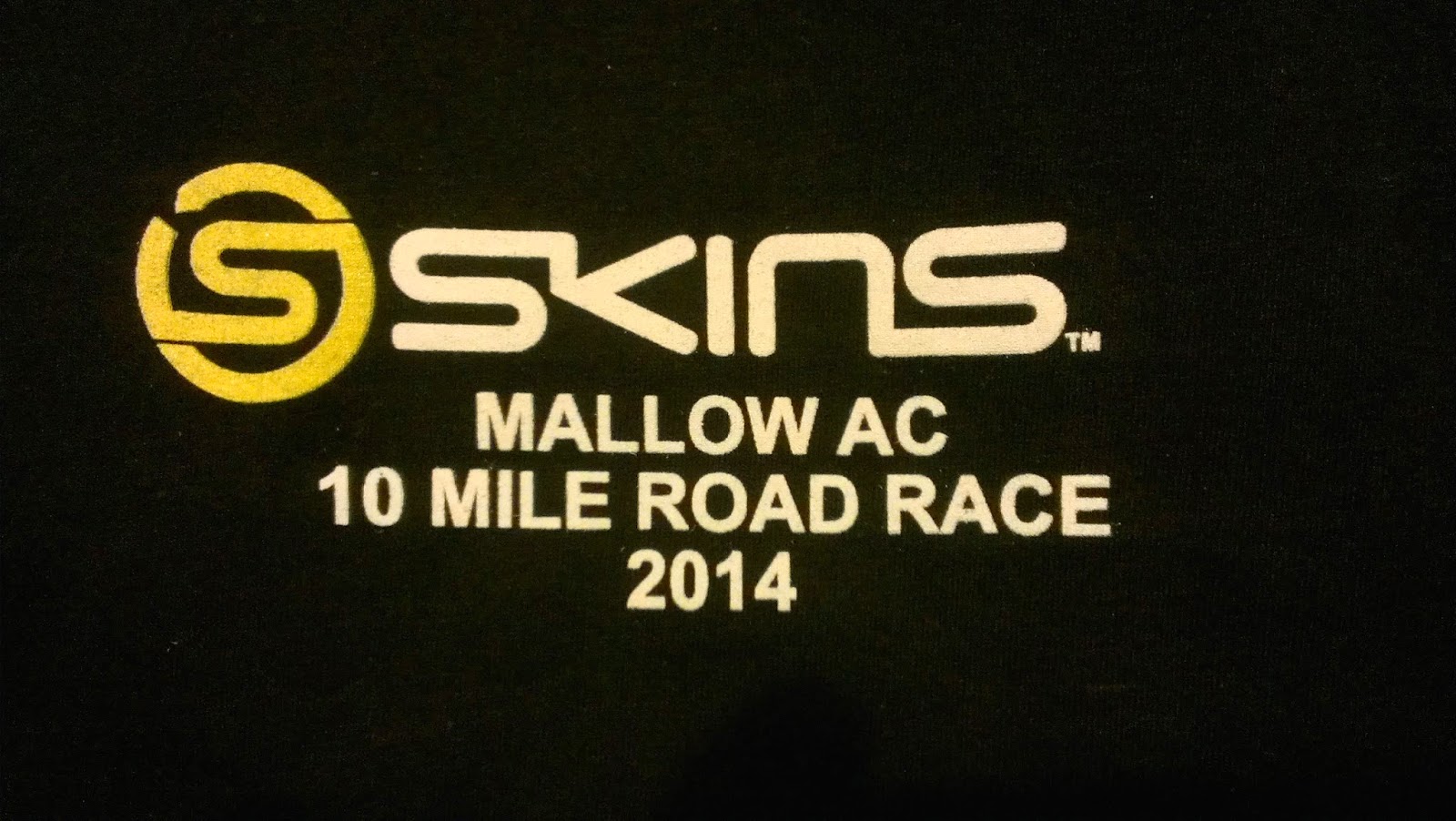 Last week was the start of my tapering for the Connemara Ultra on the 6th April, even so I decided to do the Mallow 10mile race on Sunday.

Its only my second 10mile race with my last being the Stook 10 miler in November, when I ran Stook I wasn't expecting a PB and I experienced no surprises as I finished in 73min which just happened to be the same time I've also managed during training runs so nothing great.

Before taking on the Mallow 10mile race I took it very easy this week as I could still feel the 70miles from the week before still in the legs, so my runs for the week consisted of:

On Sunday of course I had the Mallow 10mile race and while I wanted a sub 70 I wasn't prepared to really push myself too much as I'm mindful of my next race in April, so with that in mind I sat myself in behind the 70min pacers.

Staying with the 70min pacers worked for about the first two miles, at which point the crowding around the pacers started to annoy me so I headed out in front. For the first 4miles I took advantage of the slight downhill and I managed to hit the 5mile mark around 34:40sec.

At around mile 7 I started to struggle a little and it was around this time that two people from Waterford A/C passed me and I upped the pace abit and tried to stay with them for awhile, I eventually lost them around 700metres from the finish

I found the last mile to the finish a bit of a challenge but then I still managed it in 6:44min/pace so I knew I'd have a very comfortable sub 70 finish, I finally crossed the line in 69:20 so very happy with the result.

Overall a very well organised event and I enjoyed the challenge, I'll try make it back next year for a re-match :)

So that's it, I'm now officially tapering for Connemara Ultra on the 6th April,

Last week I wanted to do one last week of high milage and then drop down the milage for the next three weeks so I'm well rested, so with that in mind my runs this week consisted of:

Monday's run started off well enough with the aim of keeping a 7:30 pace and all was going well until I met the wall of mist about 2miles in, the visibility dropped to about 200metres or less at times,

Ordinarily I might have turned back and gone a different route, thing is I knew that if I kept going the return 6miler would be a much safer road with no cars on it, I just had to get to the turnaround point first.

The visibility had reduced to about 100metres by the time I hit 5miles and just seemed to get worse. I'm sure any motorists I met thought I had some sort of death-wish running towards them with such poor visibility.  (I did have a headtorch and stuff though....)

Tuesday was a much slower run at 8:01 and was pretty uneventful.

Wednesday again was another 12 miler, mist made another come back but no where near as bad as on Monday. It was also the first time in a very very long time that I had a motorist beep at me.   I can only assume I sort of scared them (perhaps they were half asleeep?) as I was in the hard shoulder and wasn't a danger to them in anyway.

Thursday's run was another uneventful run but this time I decided to drop down the pace to 9:00 miles as I was wary I had 20 miles to run the next morning,

Friday's run was a very early start and unfortunately the mist from earlier in the week was back with a vengeance which meant I'd have to stick close to town, so I ended up doing 15miles by doing loops of the town. Due to time restraints I had to do the remaining 5miles after work.

Finally my last run of the week to make 70miles was a 10mile run on Sunday, I broke this into two runs of 5miles the first being faster then the other.  It actually felt surprisingly easy.

All the mid-week day runs were done in the morning before work, Friday's one was a killer getting out the door around 5am!

Overall its been a very good training week and I feel I'm in good shape :)

Very easy week of running with some rest days as took longer for legs to recover after the 30miler to Waterford and also have a blister from all the rain during that run which just seems to be taking its time healing up.

On Friday I decided to try out a new running route, its a 12mile loop, 6miles on a busy enough road and 6miles on a road with no traffic.   It worked out well and I encountered no dogs (always a plus!).

Only downside of the new route is its all relatively flat!

Half of this new route goes into Co Tipperary and without a doubt the road quality massively goes down hill on this portion of the loop as 3miles of it are on a back road which must have a good few thousand pot holes.

However, once I cross back into Co Kilkenny on the same road all the potholes disappear straight away.     Overall it was a good route and I plan to make it a once or twice weekly route from now on.

Didn't manage any runs at the weekend due to other commitments,

For this week I decided it was time to up the miles again with the aim of also fitting in a nice slow 30mile run.

I took Friday as a rest day but headed out for my usual run on Saturday in Kilkenny, I only met up with one of the lads who is running Ballycotton next week so he wanted a faster pace. We end up running 12miles at a 7:29 pace.     I actually joked to him I was looking forward to running a much slower pace on Sunday......even if it was 30miles.

The 30mile route I decided to run on Sunday was a route I've been wanting to run for a few years now, it's the 30mile distance between where I live and Waterford City.   So with that in mind I set off at 6am with the idea and that run would take me around 5hrs at a nice easy pace.


Despite a lovely sun rise the rain and wind started at mile 15 for the first time and stopped again perhaps a mile or two later, however it kicked off again around mile 24 and only got worse after that.

I made it to the Rice Bridge in Waterford and then double backed a mile to get a lift from my wife in the car, all in all I enjoyed the run but I started to get very cold after mile 27 as I was soaked through due to the rain and my hands were freezing.

Considering I had run 12 miles at a 7:29 pace the day before doing a 30mile run I think I got on just fine.