So with only a few weeks to go before the 100km I decided that last week and this week are high mileage weeks with the aim of hitting between 70-80 plus miles each week, the plan then is to take two taper weeks before Portumna 100km so I should be well rested.

My way of doing this higher mileage was to split 15miles each day into two runs (Morning & Evening) for 5 days, then take a rest day and get a LSR at the weekend....or atleast that was the plan!

Monday went fine and I felt great but I very foolishly pushed the pace much more then I should have and as such I suffered on Tuesday, not so much on the first run but very much so on the second run as I just felt I had no energy.

So after Tuesday turning into a little bit of a mess I decided to take Wednesday off as a rest day, on Thursday I felt a little bit more back to form and managed a nice comfortable 8miles in the morning but I didn't manage to fit in a second run due to other commitments.

Friday was supposed to be a rest day when I started off this week but instead I decided on a faster 10miler in the evening, Saturday was a nice easy 5mile and an easy 10miler on Sunday as well.  Overall the week went well enough but I was more tired then I thought I'd be.

Mileage should be around the same this coming week and I'll also have a marathon to do during the weekend.

Change of plans and downtime

The week after Stoneyford 10km I was supposed to be a very very easy week as I had planned on doing the Staplestown 50/50 on the 17th May of which I had planned on the 50mile event, unfortunately other stuff got in the way so I couldn't do the race.  Hopefully I'll manage it next year!

The aim was to use the 50miler as a sort of training prep run for Portumna 100km in mid June to try a few things out, I was going to go out nice and slow and keep a even slow pace.

So as I'm not doing the 50miler I decided on a pretty easy week and got some gardening done instead, so all the onions, spuds, carrots etc are now all planted, finally!

The week consisted of:

I took it easy during the start of the week but then decided on a faster 5miler on Wednesday as well as a nice walk with my wife, after that I took two rest days and then headed off to a local wood to clock up 15miles on Saturday.

The 15miles felt great, part of the route I took had some very steep hills and while it was a pain going up them it was great fun running back down so I always had that to look forward to!

The week ahead is going to consist of 15miles a day broken into two runs each day, the aim is to hit between 70-80miles this week and do the same next week as well.

Last Friday I decided I'd give the Stoneyford 10km a go on Sunday, its a local race and I've been meaning to do it for a few years but I've either ended up working on the day or stuff got in the way. 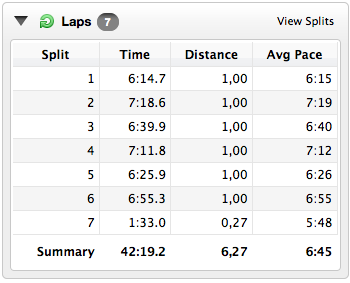 Although I had around 35miles already in the legs from training earlier in the week I figured I "might" be able to pull off a sub40 with my previous personal best being 44:22 in 2012 and the fact I managed 43:30 as a training run a few weeks back.

So quick warm up and I felt good before the race and I headed out with the 40min pacer, however I knew from about 1mile in that my legs felt tired and it was going to be a challenge, shortly after at around the 1.5mile mark I decided it was best to drop off the pacer group as today it just wasn't going to happen.

After that I kept on going trying to at least catch the one person ahead of me but at the same time not go all out,  I knew by the time that I hit the 5km mark that I was realistically looking at a 42 or 43min finish time but I also knew there were some down hills after Kells and coming in towards the finish that I'd be able to make up time on.

Just after the 5km mark one other runner passed me, this was the only person to pass me after I dropped off of the pacer group at 1.5miles, my goal at this stage was to pass the closest runner to me before the finish and I managed this at around the 5mile mark.

After that I had the downhill towards the finish to look forward to and so I pushed on and finished in 42:20 (29th place) and 4th from Kilkenny City Harrier's Club across the line. 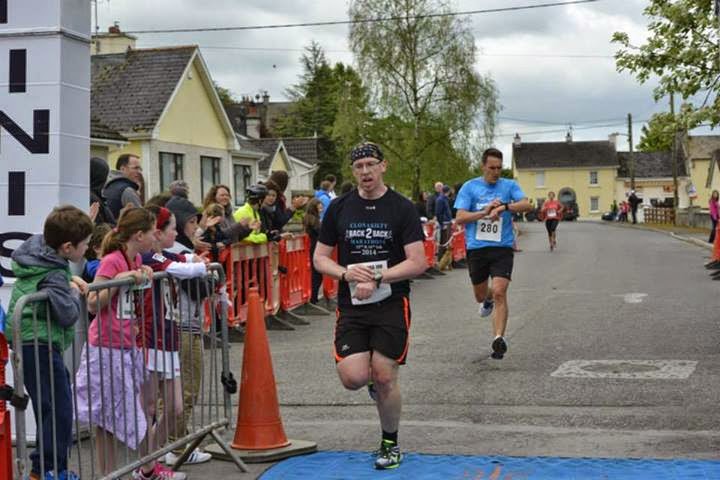 In hindsight aiming for a sub40 was perhaps idealistic considering I had 35miles already clocked in the week and 16 of those were on Thursday with only one rest day before the race, still I've knocked almost 2min off my previous personal best from the JJ Ready 10km in 2012 so its still a good outcome and I felt fine afterwards.

First run of the week was supposed to be a nice handy recovery run on Monday but instead I decided on a rest day and opted for a longer 8mile run on Tuesday.

I got out the door at 6:30am on Tuesday and had a really peaceful run and had a number of the "this is why I enjoy running" moments, no cars around, the countryside around me and I could see Slievenamon off in the distance on such a nice clear morning.

Wednesday consisted of a a much slower 4.26mile run at a pace of 9min, I really should have done this run on Tuesday instead of the 8miler as I felt the 8mile run in the legs after it.

On Thursday I decided on a new route which passes near the old ruins of Kells Priory in Kells, Co Kilkenny which are also known locally as the Seven Castles.

The Seven Castlkes are pretty extensive and I've always enjoyed going for a walk around them when I was growing up, never thought I'd run from my house to them before work some morning.      Since I was passing nearby I decided I might as well run through them before I headed home, very odd  running through it at 6.30am. 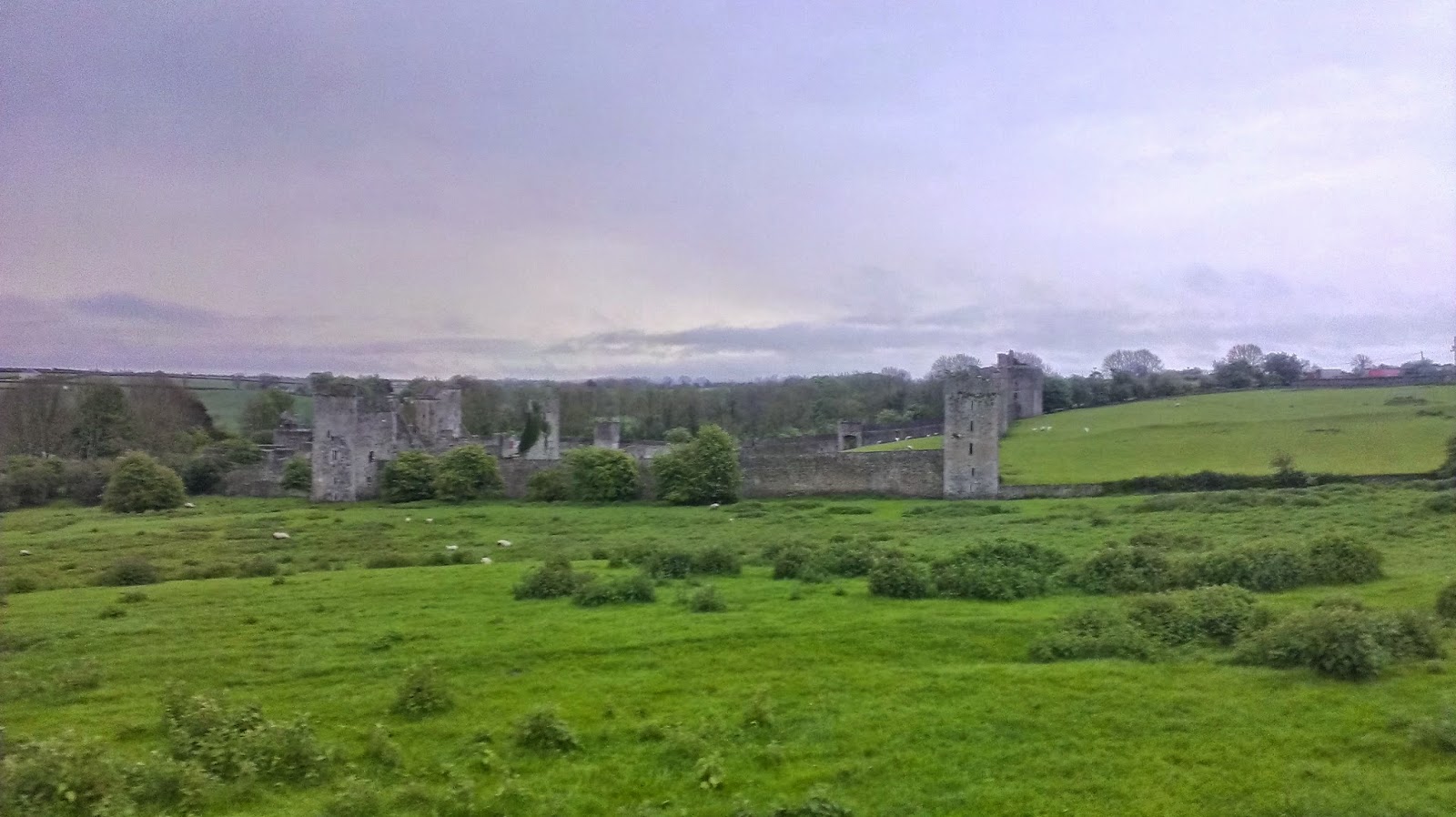 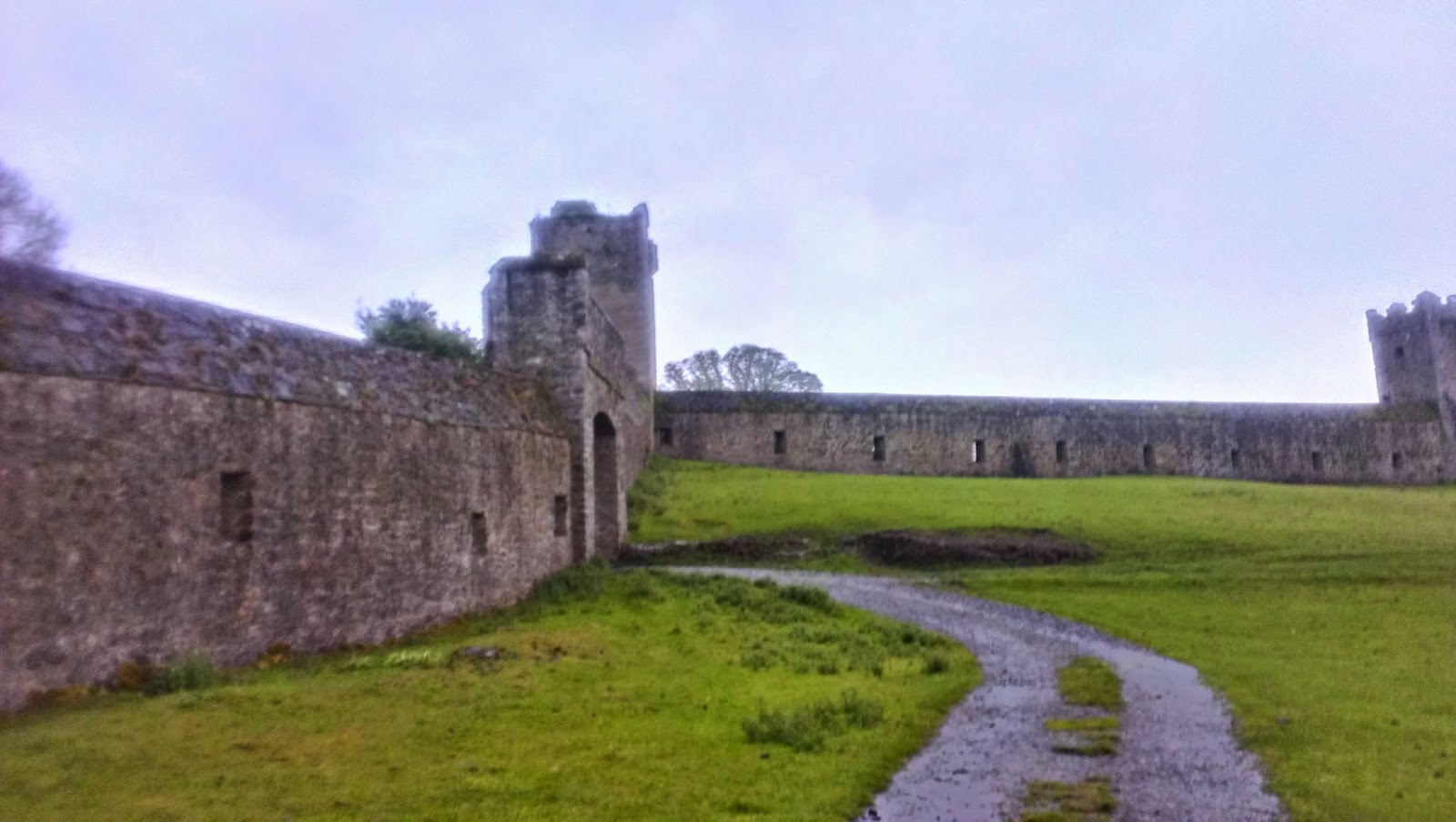 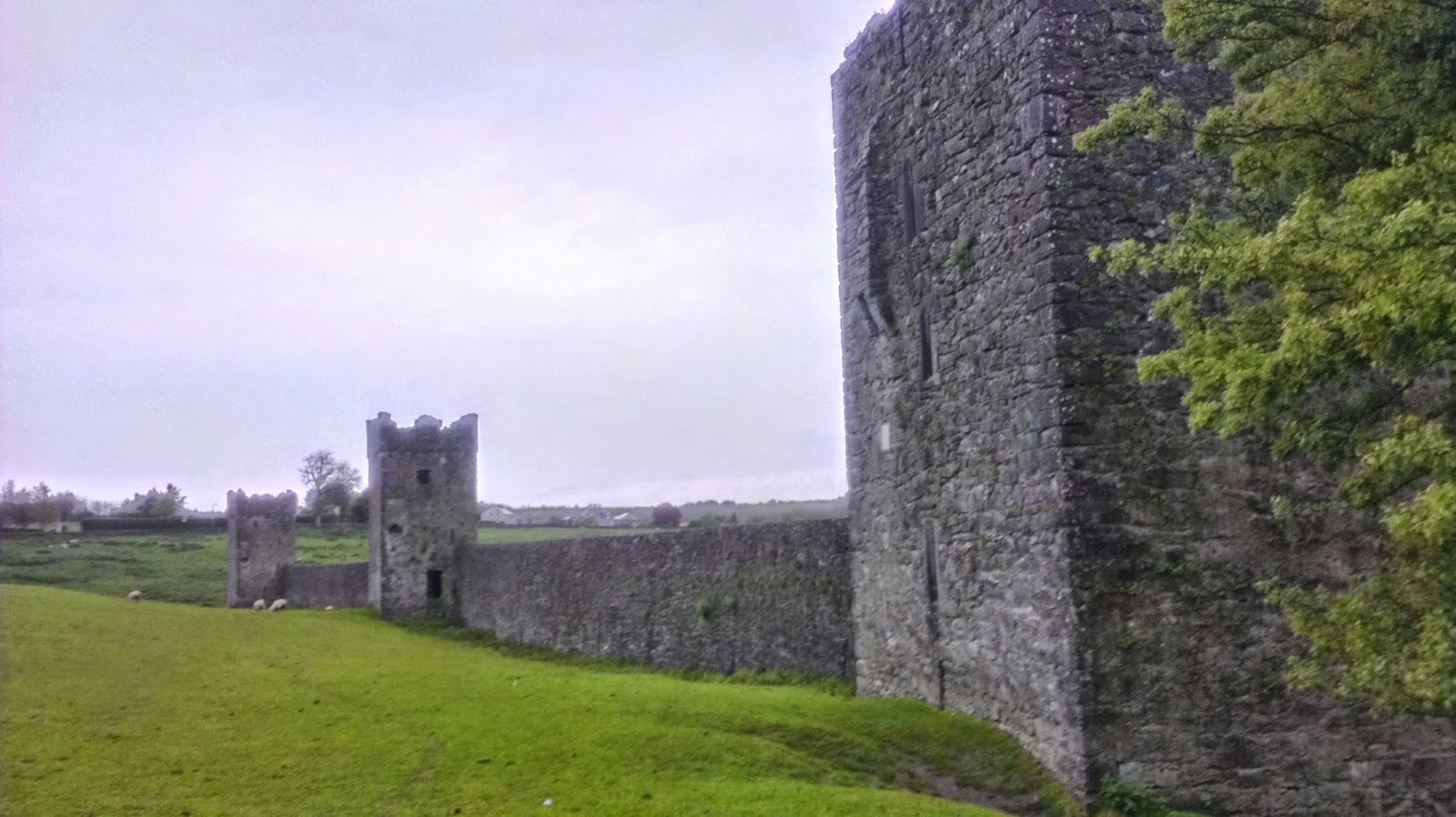 After running through the seven castles I crossed over the nearby river and passed by the two watermills and headed for home, it was a 5am start for this run and it bucketed down rain for the first hour or so and although it pretty much rained for the entire run it was still enjoyable.

I hope to do this route in the future again as its pretty enjoyable, however the second half coming back from Kells had some hills. Its likely this would do me no harm considering most of the routes I run are basically flat.

Friday was a slower recovery run and Saturday was a rest day, on Friday however I decided to sign up for the Stoneyford 10km in Co Kilkenny on Sunday. I'll write up a short report about that later in the week.

My foot started to feel better towards the weekend of the 25th/26th April so I decided to get out and about on Sunday and do a 12mile run to see how it would fair, the run was much later in the morning then usual so it was pretty warm but overall it went pretty well and no blister problems so looks like its back to business as usual.

As Sunday went well I decided to up the mileage this week with the aim of finishing in the 50's once I had the Limerick Marathon done,

Took it easy enough on Monday & Tuesday but decided on a longer faster run on Wednesday and so got out the door at 6am to do a 12mile run, really enjoyed it and it felt like I was back training before Conn Ultra at the end of march.

I ended the week before doing the marathon with another easy 5mile run,

Started off with a small group which quickly broke up with few heading off ahead of me and only around two sticking with me for the most part, one of them finally headed off ahead of me and that left me with one person who pushed on until mile 21 when he unfortunately dropped off.  Unfortunately this meant it was a finish on my own in the end. 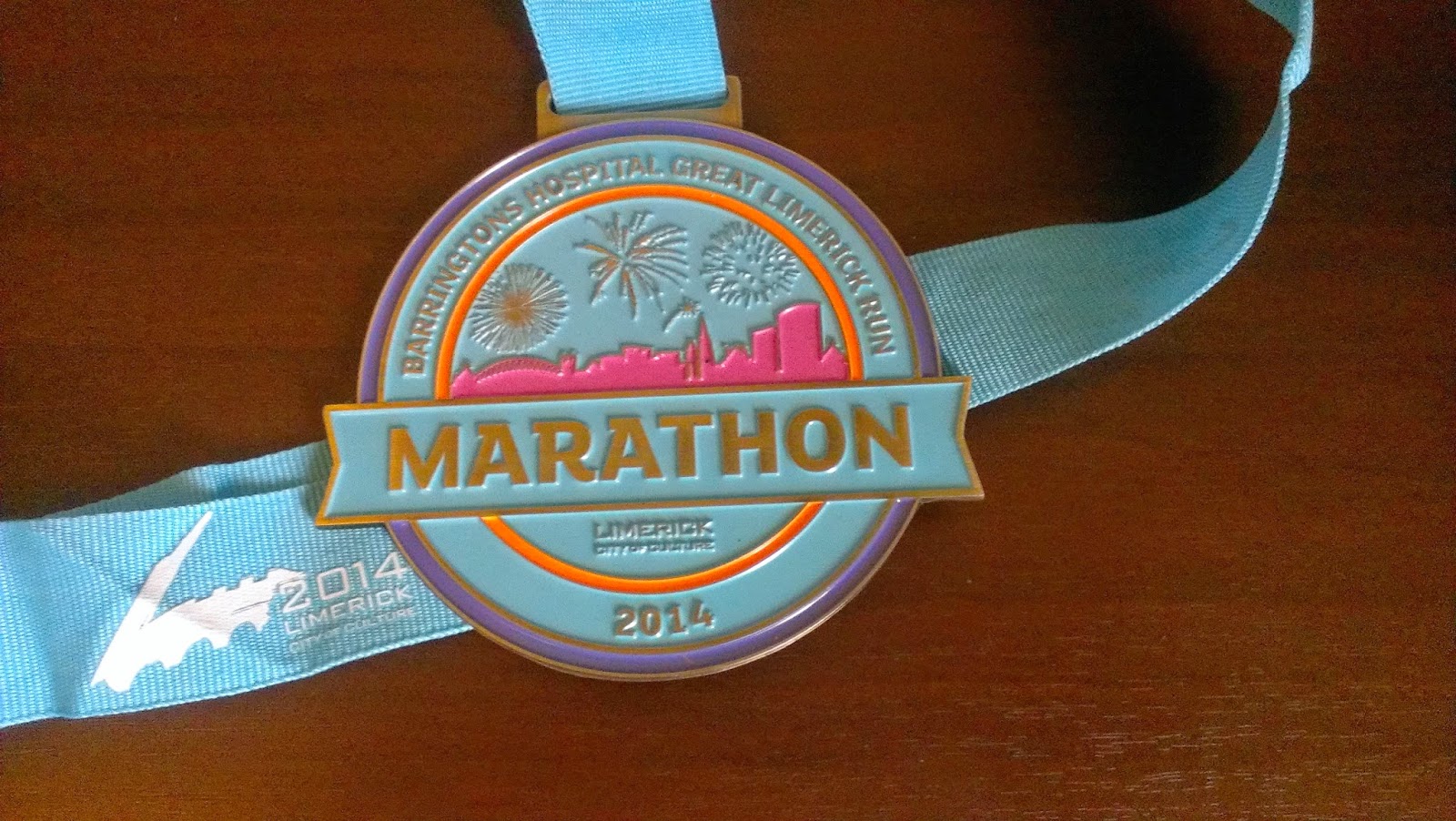 Legs were a little tired after the marathon but otherwise felt fine, only took one gel during the run.

On a side note I've gotten myself a pair of new runners, this time they're 10 & half instead of size 10. This was on the suggestions made after the Connemara ultra when I found I had two black toenails.  So I'm hoping the larger size will save my toenais on long distance runs.