Some cycling and some running...

I've been doing a bit of cycling and running the last few weeks, I'm not doing the same amount of miles each week/month with May of this year seeing the most miles logged with a marked drop since then as confirmed by my Garmin. 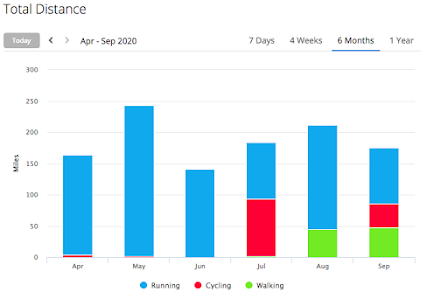 A lot of the reason for the drop in the miles is I've been busy painting and stuff in the house and also I really don't have races to aim for, Tralee, Cork, Dublin, Kilkenny marathons have all been cancelled so there's been nothing to really train for.

Kilkenny and Dublin have put on virtual events and I did the Kilkenny Medieval Half-Marathon on the weekend of the 12th September but the same incentive to push the pace doesn't exist with a virtual event so I finished in a time of 1:38:09 which put me 3rd in the half marathon results.

I'll get back to more running as Dublin gets closer, especially as I accidentally signed up for the Dublin Full and Half-Marathon which have to be both run on the same weekend at the end of October!