A global pandemic will change things...

The world has changed so much since my last blog post on the 4th of February so I'm going to detail some of those changes below as since January the media reported the covid-19 outbreak in China and as things moved into March we heard about it in parts of Europe.

I kept on doing my training runs in preparation for the Tralee Marathon on the 11th April but back on the 13th March due to the covid-19 global pandemic things drastically changed in Ireland as the Irish government starting closing schools, colleagues, pubs and any unessential shops and business. 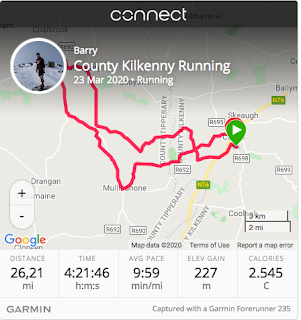 This, as it turns out, worked well for running as I was able to run some normally very busy roads to do some nice long runs up around Co Tipperary including a marathon distance up around Ballingarry, however then further restrictions came into force on the 28th March meaning any non-essential travel including for exercise beyond 2km was not permitted or encouraged.

Due to the 2km restrictions, I've been doing longer runs by taking in a few of the local loops and out and back sections to reach 8 and 10miles. But I still wanted to do a marathon distance since basically all races between now and July are postponed or canceled (No Cork or Waterford marathons for me either).

Last week I decided I'd run some loops of the estate I live in, specifically I'd keep running the

0.28mile loop outside my house until I hit a marathon. I started off at 8am and to the bemusement of neighbors I kept on looping and passing my water station outside my house and I hit marathon distance in 3hours 47nmin.   Not bad overall.

But even before I hit the marathon distance I decided I wanted to hit a nice even number of 30miles, so while I slowed down a lot I kept on doing loops until I eventually hit 30miles in 4hours 42min 59sec.

All in all not a bad day really.

But back to the pandemic.....right now as I type there are 2,329,651 confirmed cases and 160,721 deaths with the USA being the number one country in the world for infections and deaths (740,557 infected, 38,979 death) much of which can be put at frankly disastrous handling by Trump and his administration. In Ireland, there are 14,758 confirmed cases and 571 deaths and right now they are reporting that we've flattened the curve.

Overall in Ireland restrictions came in quick and we were certainly much more pro-active then our next-door neighbors in the UK which went ahead with events like Cheltenham which result in about 60k people a day mixing in close quarters.

There have been a few infection cases locally and even deaths from health staff in the local hospital which is worrying and extremely sad for the families affected. There is a big focus on protecting elderly and vulnerable groups from the virus and on that note, my parents have been on lockdown since this all kicked off so they've not gone further than their garden.
Posted by Barry at 7:54 AM No comments: