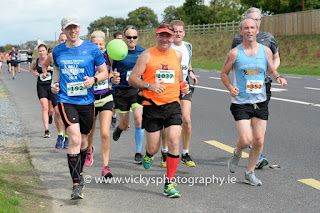 Race day arrived on the 15th Sept and I headed into Kilkenny to do the Medieval Marathon 2018, although this race takes place only 10miles away from me as I've mentioned before I've never run it so I was looking forward to it.

I headed to race number pickup which was taking place just across from the very famous Langtons Hotel, collection was quick and it was good to see some familiar faces even this early on in the race.

One thing I've forgotten to mention is the night before race day there was an announcement that due to a large funeral taking place out in Church Hill area in Cuffesgrange the marathon route had to be re-routed as it would have created a safety hazard otherwise.  I'll get back to this later in the race report though.

The start for all the races (marathon, half, 10km) all started in the same location which was the CAS bridge, not a bad location as it was easy get to but it is a very busy area road traffic wise.

My aim for the day was somewhat hopeful, I was aiming to beat my sub 3:29 PB so I decided to head out and stick with the 3.30 pacers and speed up towards the end....at least that was the plan.

Of course that was the plan and like everything I don't always stick to it especially at the start as crowds annoy me in races so for the start of the race I upped the pace to get ahead of most of the crowd, but by the time I hit the 3-4mile mark I met up with the pacers and I stayed pretty comfortable with them.

As we approached Cuffesgrange this is where the race route changed and I must say I was disappointed, partly because I knew the route off by heart and enjoy the route but also last minute changes are never good for people especially when it comes to races.   However, I fully agree with the reason for the route change as I'm local and was fully aware of the sheer size of the funeral taking place and the safety issues it would have represented to the runners.

However I feel very sorry for the race organisers and I'm sure it created many logistical problems for them on the day including with stewards.

Due to all the changes instead of heading the route I'm used to running on we headed off on a different road and as the miles dripped by I dropped the pacers and headed off ahead of them as I felt comfortable.  This section of the course due to the route was an out & back (I'm never a fan of these!). 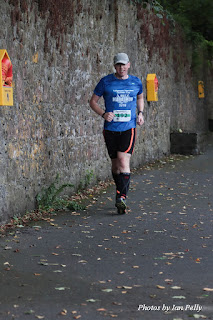 On the way back from the out-and-back I met the pacers and continued on, at this stage I was starting to feel the miles and when I reached the Kilkenny road (about 5 miles from Finish) I could see the pacers behind me and they soon caught up with me. By mile 22 the pacers caught me and very quickly I was dropped by them as I get a cramp in my left leg.

From here on it was a bit of a slog to Kilkenny City and it wasn't the most pleasant experience while I tried my best to try recover some sort of decent time out of the race.

Once I hit into the city the route took a lot of twists and turns and involved crossing some very busy roads which wasn't ideal. John's Bridge especially was very congested traffic wise and involved running between the cars in traffic to cross the road which I wouldn't expect to have to do in a race.

Coming up to Kilkenny Castle and the finish line was a little bit of a slog especially coming up from the Canal Walk but at least nobody was in the way, but once I reached the castle wall I started to meet people.  While most of the time these people seemed to get out of the way or at least be aware there was a race taking place as I passed the entrance to Kilkenny Castle a group of American's walked straight out in front of me and only for a quick jump out to the left I would have collided with them.

Not the PB I was aiming for but none the less I'm pretty happy with it. 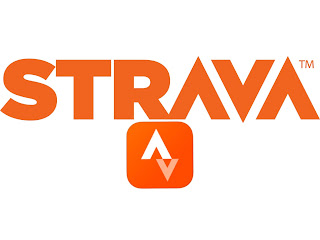 I'm on Strava and I'm still training by doing about an average of 30miles a week,
but thats still not an excuse for not updating this blog

If you'd like to follow me on Strava you can find me here.
Posted by Barry at 9:44 PM No comments:

So I have finally booked my next race and its this Saturday the 15th in Kilkenny City, it's also a marathon!

I've not run a marathon as a race event in some time, while I had planned to run the Waterford Marathon the race organisers cancelled it because of heat during the summer which was awfully disappointing and frankly I think it was a overreaction.  It was also likely due to them choosing a poor route which they knew they could not provide adequate first aid support on due to the narrowness of the Waterford greenway.

After doing the Tullamore Half marathon I decided that since I'm not doing Dublin this years I'd opt to do another marathon so I've settled on the Medieval Marathon, its in its third year this year and although it only takes place 10miles from where I live I've never taken part in the race.

Although I've not taken part in the race over the past few months I had changed my regular running route in order to allow me wife to drive to work and then I would run into Kilkenny City and collect the car. The route I happened to take for this avoids the main and its a pretty nice route, some of this is incorporated in the marathon route so it should be interesting.
Posted by Barry at 4:51 PM No comments: