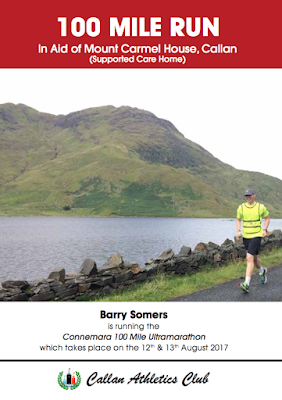 Sorry for the lack of updates but I’ve been allowing time for my back to recover and thankfully both my back and ankle issue's have resolved themselves so its all back to normal and all systems go!

After discussing online with other runners I think I’m inclined to put the back issue down to over training.
While I don’t think I had moved into over training territory I guess after the 56mile run to Waterford so niggles can be expected.

Plus due to my ankle issue this would have affected my running stride which in turn would have caused extra load on another part of my body which could very easily caused the back issue to trigger.

Its less than 4 weeks to go to the Connemara 100 Ultra and I’m counting this week (16-22nd July) as my last decent week of training before I start to taper and take it easy. So I kicked off this week with a 18mile run out to Stoneyford via Kells and back to Callan in very hot conditions on Sunday evening starting around midday…and boy was it hot!

So far this week I’ve been taking it easy with only for example a 3mile run this morning (Tuesday) but I’m aiming to up the distance over the week and to finish it with 8miles Thursday, 15-20miles Friday and finally 10miles Saturday.

Of course I’m not just running Connemara 100 this year and thats it, I’m running it and also raising money for a local organization so if I’m not running I’ve been knocking on doors around the community asking for donations and I must say the response overall from everyone has been great.

To everyone that has donated so far I would like to thank you very much, regardless of the amount donated it is all very much appreciated and every penny of it is going to Mount Carmel House Callan.

If you'd like to sponsor me and donate to Mount Carmel you can do so via Justgiving.com or by clicking the sponsorship image below.

Last week was all about recovery and it didn't get off to a very good start sadly.
To started with on Sunday after the run to Waterford I could barely walk due to the pain in my right ankle that I mentioned in my Waterford race report, but I tried to walk anyway and I put on my walking boots to head to the wood with the dog, it wasn't a very pleasent experience and I basically had to walk with the laces untied.

Due to the ankle pain I took Monday as a rest day but on Tuesday I headed out for a very, very easy 5km run, it went pretty good but I could still feel the ankle and it still hurt at times throughout the day.

The rest of the week was made up of slow 5mile runs on Wednesday, Thursday and Saturday to ensure everything kept ticking over after the 56mile run and I didn't seize up like I have when I've stopped running for a week after previously very long runs.      I had hoped to do a back to back 20mile and 10mile run on Saturday & Sunday but due to other commitments I wasn't able to do this and postponed it until next week.

This week I started off well with a 5mile run on Monday morning which was nice and quick but trouble started almost as soon as I got home, my back started hurting!  Throughout the day it was pretty painful but the more I moved around I'd find it would lesson the pain, sleep on Monday night was a very uncomfortable experience to say the least.

On Tuesday I had arranged to get the car serviced down in Waterford so I threw the road bike into the car and decided I'd cycle the Waterford greenway instead of running due to the pain and I managed to clock 32miles in around 2hours 20min at a handy enough pace, thankfully my back didn't hurt me during the cycle.

Yesterday I decided to try running again and headed out for a slow 4mile run with the dog, I could certainly feel the discomfort in my back but it went pretty well otherwise.

It's been a very mixed two weeks overall.

While I can completely explain the right ankle pain and slight swelling the back pain has just come out of no where and its not very pleasent, I simply don't expereince back pain at all generally so its concerning.   It's also pretty worrrying as I'm appreaching the 12/13th of August for the 100mile.
Posted by Barry at 2:30 PM No comments: