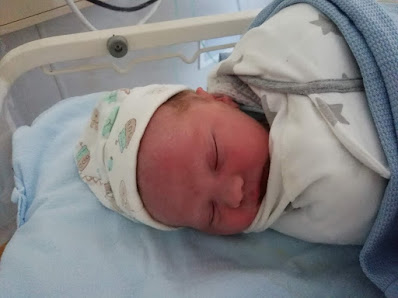 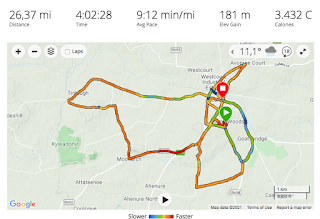 The weekend finally arrived to do the virtual Half and Full marathons I signed upto, one of  challenges
with doing these two runs is Grace is due to give birth over the new few days which means I couldn't go running miles and miles away from our house like I normally would.   Instead I ended up doing different loops that were no more then 3-4miles away from the house.

My plan was to get the full marathon out of the way first and do the half on day two, these weren't going to be any sort of runs I was going to set new personal bests on by any means. I just wanted to cover the miles for the back2back challenge.

I set off for the marathon on the 24th just after 7am and started the first of many loops, for very obvious reasons I brought my phone and I also needed to bring it to run the Virtual Dublin Race Series App so I decided to listen to some podcasts for the run.  I met a few people that were clearly doing the virtual half-marathon based on the much, much faster pace they were pushing.

After what seemed like endless loops around the town and surrounding countryside I eventually finished up in 4hrs 2min. 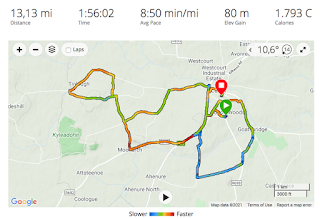 Day two took a lot more effort, I almost called off doing the run but eventually headed out the door at 4pm the next day and again I did loops around the locality. This felt much more of a slog especially towards the end and it was very far from my fastest half marathon but I managed to just about finish it in under 2hours with 1hour 56min.

One major take away I took from these virtual runs is the Dublin Virtual Series App sucks, it was seriously inaccurate when it came to the distance and it was off my 1mile when I did the half marathon.

It was also annoying to have to worry about the app being open on my phone so due to the inaccurate meassuring I opted to upload my Garmin results over the app tracking.

Still, the swag I got in the end wasn't bad. I could live without the medals but I really like the arm warmers and they'll get plenty of use!