Time to put the head down and train..

So the training situation hasn't been very structured lately. There's been alot of breaks and very very easy weeks with holidays and while I have noticed speed increasing (normal 5mile runs going from 7:40min pace to closer to 7:00min pace) I've not been following any sort of training plan and that needs to change.

To get things back onto some sort of proper training plan I began last week with a nice fast 10miles at a pace much lower then the 7:26min/pace I need for Dublin, I didn't want to overdo it when returning back to a week of higher miles so I took it nice and easy the next day and headed out for a very easy 20miles on Thursday.

Despite Thursdays 20miler I still felt fine on Friday doing a sub 7min avg pace for 5miles, infact doing the faster paces is certainly coming easier to me even after long runs like the 20miler. At times I've been running what I thought was a nice handy pace of over 8min, only to look at my watch and see its a 7:10min/pace or lower.

My aim this week is to work on speed by aiming to do two hard interval sessions....I really hate intervals!

It was a nice week for a nice holiday

The week before we were very worried about how the weather might turn out but as luck would have it the weather was actually pretty good for the week and we spent the time camping in Co Wexford and Co Waterford.

I only managed about three runs the entire week, the first was along the seriously long beach at Morriscastle in Co Wexford which I ran 6miles of and I still couldn't see where it ended. (it seems its actually 13miles long!)

Also had did a lovely run along the coast near Dungarvan on the Friday, other then that I took it all pretty easy

Email ThisBlogThis!Share to TwitterShare to FacebookShare to Pinterest
Labels: holidays

Back to business as usual

Training for Dublin City Marathon in October is going well, my pace is gradually increasing and although I really dislike doing intervals I'm pushing myself on them and managing 5.30-5.40 pace on many of them...something I'd never managed before.

Doing the intervals is also paying off on my longer runs as I find the effort to start going down to sub 7.20min pace is less and less, so all in all its good. I think this was also evident during the recent Waterfront Ultra as I found it so much easier to do those faster miles for the first 24miles or so.

Of course there's some difference between doing a 3:41 marathon and doing the 3:15 marathon I actually want in October but its still great to see I've had some improvements during the past few weeks and its even better to feel back to normal after Thames Path 100.

Despite getting sick after it its evident that my recovery after the 100mile race has gone much better then my recovery last year after the 100km in Portumna, but then I did very little running during May and June and this I guess was badly needed as a resting period.

During the week I didn't do a mad amount of miles, but out of the miles I did do I felt good and also did a mix of paces. So for example on Friday when I did 11miles about half of these miles were near or close to 7min/miles.

So after last weeks 36mile Ultra I opted for a much shorter race this week by taking part in the Piltown 10km race in Co Kilkenny on Friday night.   I've not done a large number of 10km races but I've always seen an improvement when I run them and I'm still chasing the elusive goal of a sub 40min 10k.   To get a sub 40min time it meant I had to run an average pace of 6:26min/mile for the entire distance. This is a big ask after last weeks 36mile Ultra but I was hoping I could pull it off none the less.

This was a race starting at 7.30pm so I headed off for the start of the race and met up with the lads from town, between all of us we were aiming for times ranging between sub 40 - sub 45. The conditions were good and the course was advertised as fast so there was a lot of hope of reaching our goals.

The race started on time and we were off; the first mile was a slight decline and as always it was fast as during the first mile I averaged a pace of 6:03min/mile, I spotted this and I eventually slowed onto the second mile. By the time I was heading into mile three I have to say I felt like my legs were heavy and I knew that to try push for a sub40 time was going to be extremely difficult! However I pushed on and headed for what appeared to be an endless section of straight road which began just before mile 4 and eventually ended around mile 6.

By the time I was coming up on mile 5 I pushed the pace and passed two runners; I kept ahead of them for approx half a mile but eventually they gained back the space I had put between them and eventually got maybe 100metres ahead of me.

As we approached mile 6 there was a slight incline on the course and we headed into the GAA grounds where the surface changed coming up to the finish line to gravel and to eventually grass as we raced towards the finish. I tried my best to even catch one of the two runners ahead of me but I just had no more energy in the legs to push any harder.

I finished 37th across the line (out of 128 finishes) in a time of 40min 50sec and was happy to lay down on the ground for a well deserved rest!

Its not really the sub 40 I had hoped for but still a new personal best I can be proud of as it shaves 7 seconds off my previous 10km distance set during the Danesfort 10km in September 2014.

I think without a doubt if I had not done the ultra last week, I would have broken sub 40 but overall I'm very happy with how things went. Also, after the start and with the exception of the two runners at mile 5 only one other runner past me after mile 1, that's always a confidence boost.

Garmin of the course and my laps can be viewed below: 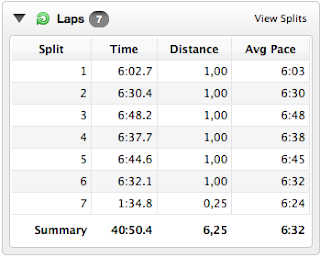