Recovering from the Back2Back....

It's been a very low milage week this week due to the problems with my left leg,

It took until Wednesday for my left IT band to start feeling ok again but as I write this now I still have some minor discomfort with my left shin (where the branch hit). Majority of the week was just resting and walks.

For a change on Saturday instead of trying to aim to do a long run I decided on a cycle so I took the roadbike out of the shed where its been sitting since last May, pumped up the tyres and got ready to go.....only to realise the front tyre had gone flat after I had pumped it up!

So after 40min spent changing the tube (its been awhile so I'm out of practice) I finally got out and about and I must say it was a nice change.   It was very easy on the legs and it was lovely to cover so many miles in such short time (12miles in around 40min or so).

Finally, Sunday I decided to go out with the club for a run. The new route for the run is around 5.7km but it was at a fast enough pace (7:40min pace) so I only did two loops and then decided to take it easy in the Castle Park to finish just over 10miles.

Even with the fast miles my left leg is starting to feel ok again so its not been a bad week overall, 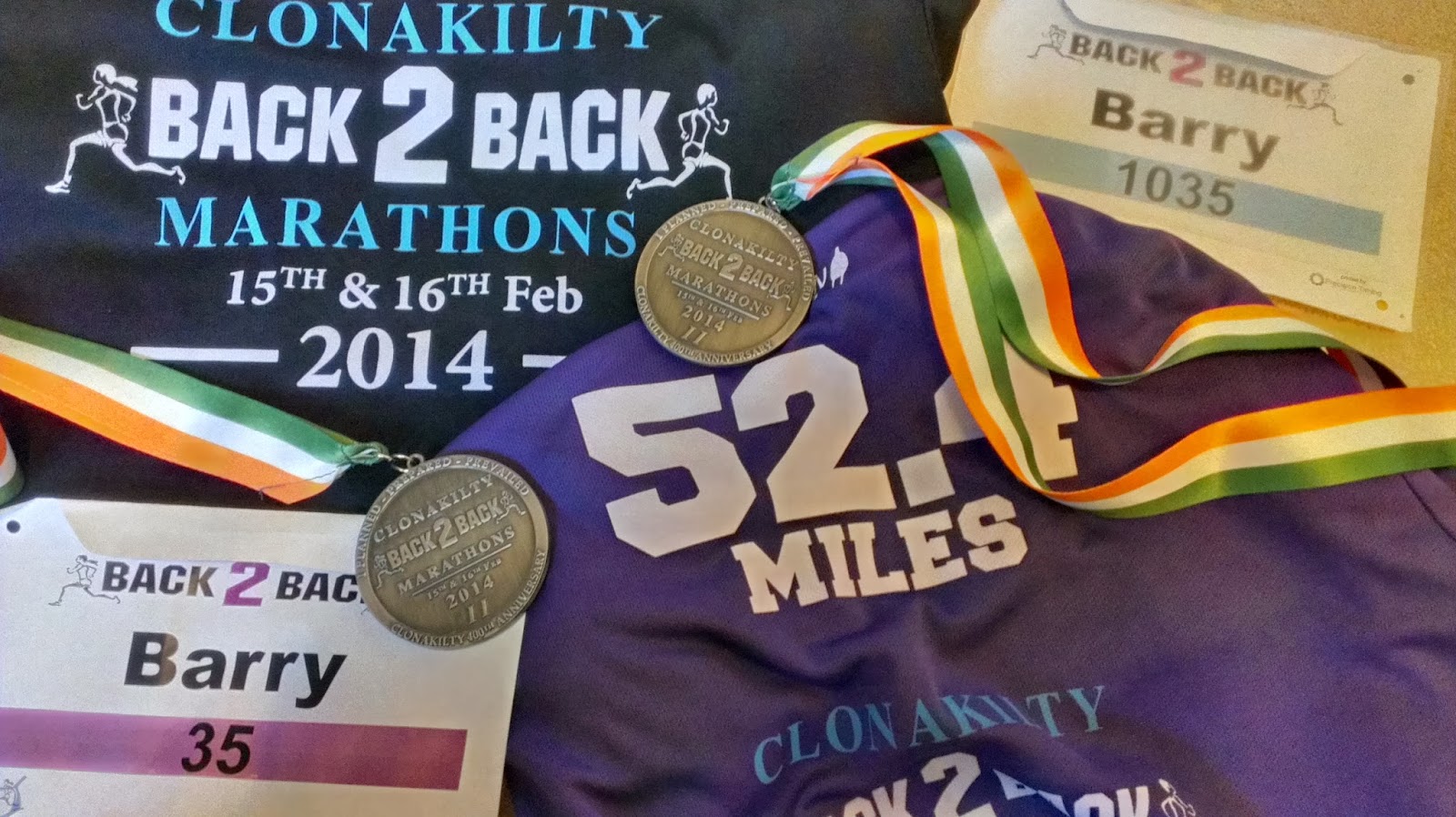 and the tapering begins

Missed out on a 10mile run during the week due to the very stormy weather, also decided against doing the club run on Sunday which means I missed out on my aim to run 60miles as I felt it wouldn't have done me any good considering what I have to do this coming weekend.

I felt the 20miler at 7:55 pace alot more then I expected last week and it wasn't until Tuesday that I was starting to feel right, in retrospect I shouldn't have run such a fast pace so close to Clonakility but abit too late now.

Taking it very easy this week with the plan of doing 3x 3mile runs at a nice easy pace, my aim for next weekend is to run both days with the aim of finishing no more then 4hrs 30min. If however I can finish both days as sub 4 I'll be very happy.

One final thing, based on my training up to now I've revised my goal time for the Connemara Ultra in April to a time of 5hrs 39min, last years time was 6hrs 29min.   This of course is subject to change :)

Dropped the milage down this week, I did intent on doing around 50miles but life got in the way and Saturday's 15mile run was scrapped.

I decided to make up for it on Sunday by doing 20miles and I ended up running with one of the lads from the club at a much faster pace then I'd normally run a 20miler at.

The starter miles were closer to 8:00/8:10 pace however the later miles from 13 onwards increased closer to 7:40 pace making an average pace of 7:55 for the entire run.     I got to admit the pace was a bit of a challenge especially considering this was a faster avg pace then I did in Dublin in October 2013 which was avg of 8:09 overall.

To put the above into perspective, I normally run 20mile training runs at closer to a 8:30 - 8:50min pace.     I really enjoyed it though and it was good to get a good measure of my fitness improvements since October.

Only two weeks to go to Clonakility Back2Back, looking forward to the challenge!