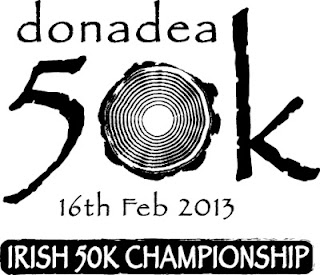 Very late with the race report but here goes anyway......

This was my second venture into the realms of Ultra running and I went in feeling abit more hopeful then the first one back in June 2012.

My aim was to improve on my last time in Portumna by in the region of 20-30min, having just previously run a 8:14min pace 22mile run three weeks before I figured I was in good shape and I'd be able to keep a decent pace to hit my target.

So the morning of the race arrived and I was feeling so so about my chances, got set for the start and off we went. Got chatting to a South African chap for the first while, he was using Donadea for training for a much longer event (pretty much the same as many at the event).

I made the foolish mistake of starting off quicker then I had planned for the first 6miles which was a very silly mistake but I slowed the pace and kept things going pretty decent until around the 16mile. This is when the wheels started to come off and I started to struggle abit.

But things really started to go down hill after mile 19 as my pace had slowed a good bit and I was now doing 10-11min miles which I kept doing until the 27mile mark. For me I believe the big factor in taking alot out of me was the mud, I'm not used to it at all and I didn't expect it.

I'm far more used to road running but in the mud on the forest trail meant I was using more energy and not getting as much back compared to running on a road, it just seemed to take alot out of me.

Eventually with the end in sight I upped the pace to what I could manage for the last few miles and finished in a new personal best of 4:49:33.  Although it is a new personal best for a 50km it was still  disappointing as I had hoped for a much better time.

This does of course have me somewhat worried about Connemara as I though I'd perform better for Donadea. On the other hand Connemara is 100% on roads so I won't in anyway have to contend with mud! :) 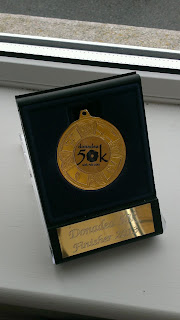 I will say, Donadea handed out a nice tech-top and medal for the event.