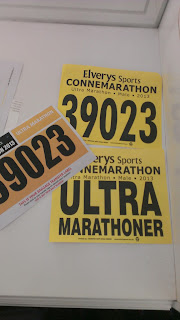 As time got closer to this run I really started to doubt myself, after last years marathon in Connemara of 4:14 and being in bits afterwards I started to doubt if it was a good idea to expect my body to run that marathon and then 13.1miles on top of it.

So on the basis of me perhaps not being in a very fit state to drive back to Kilkenny after the race I opted to stay in B&B near Oughterard just outside of Galway for the night before and after the race.

On the way to Oughterard I collected my race pack in Elvery Sport and that went off without any problems. In fact I found it much better organized then the collection point setup last year.

So early start on race day, when I got up and looked at the race numbers the nerves really started to hit home and I started to doubt if the trying to run 39.3miles was really that good of an idea. It was too late now....

Before the race all the ultra runners had to attend a pre-race brefing, during the race briefing the race director mentioned that back in 2010 Hannah Shiels who was the first Irish women to climb Everest commented to him that it was harder than climbing Mount Everest.  I'm still not sure if this was a do-motivation or a motivational comment to make but I'm sure it also made some others doubt what they were about doing.

So everyone was bussed out to the ultra start line which was around 1mile from what would be the finish line later in the day.      Off we went and straight away I kept an eye on my pace, previously in Donadea I started off much too fast at the start so I was determinated not to make such a idiotic and costly mistake during Connemara.   My aim was mintain a min of a 9.00min/mile pace throughout but ideally slower at around the 9.15 mark.

My only other concern at this stage was that for the first mile of the race we were running into a strong enough wind, knowning the layout of the course I hoped that this wind would be gone later in the day or the last 10miles+ would not be fun later in the day. I was wrong....

So I kept pretty much a steady avg 9.08 pace for the first 5miles or so on my own and then around 5miles I got talking to a chap called Troy.  I have to say this made the time fly and before we knew it we had reached the 13mile mark.

Unfortunately I really wasn't paying as much attention as I should have and I completely forgot about my 13mile drop bag, this will of course teach me for not writing it on my arm like somebody on boards.ie suggested.   Not the end of the world though as I had enough gels and stuff with me. My important bag drop was at the 26mile mark.

Myself and Troy, met up with another chap at around the 19mile mark (I think his name was Steven) and we paced together all the way to near Leenane where the half marathon started, this is also the point where we started running into the wind and it was hard going.

I've had a a very painful muscle problem in my left leg since after I did a 28mile training run around 4 weeks ago and I had hoped it wouldn't be much of an issue but coming into Leenane at the 25mile mark it started to flare up and I dropped off the pace and started run, walking.

At this stage I took on two painkillers and kept run, walking to the bag drop point at mile 26mile.

At mile 26 I took maybe 2-3min to just try and refresh myself and took on some crackers and some flat coke, my strategy was then to run-walk up the hills out of Leenane. This worked fine and I met up with one of the lads who I was previously running with that I had dropped off at mile 25 from.

By about the mile 27-28mile mark the pain killers had kicked in and the flat coke had given me the boost I really needed, I took on abit more flat coke at the 32mile bag drop.

The two of us then run-walked (mainly ran) until the beginning of the climb to the hell of the west, at that stage we met up with Troy so the three of us started the climb of the hell of the west aiming for run the lengths of three electrical poles and then perhaps walking one or two lengths.

This strategy worked well and we made good progress passing a good few people who were doing the marathon and ultra, this gave me a good mental boost.

At the top of the hell of the west there was basically a group of around five ultra runners so we started the decent towards the finish at a pace I knew the legs wouldn't be able for this as the group had picked a v fast pace compared to my pace throughout the rest of the race. Mile 39 for example was at a 8.08mile/pace even with me walking some of it!

I just couldn't keep at this pace so eventually I fell off the group of 5 and I ended up walking towards the finish, as I got closer I saw my garmin was at 6.28 so started running again as I wanted to get across the line in under 6.30.

So I finished with an official chip time of 6hours 29min 21seconds, this puts me in 83rd place out of 190 finishers. Link to my garmin for the race.

Overall I really enjoyed the race and infact after I crossed the line I felt in decent shape compared to say when I finished Portumna or Donadea 50km's. I only needed a short few seconds to get myself together to head to the ultra runner finish area at which stage I was glad to get a chair.  I even said to somebody in the finish area that I enjoyed it and I'd def do it again.

One thing that was very refreshing is at no stage during the race did I kind of say to myself "what the hell are you doing?", instead despite the muscle pain and miles I was in good form and actually felt i had the finish in the bag from mile 28-29 onwards.

I have no doubt that had the wind not been an issue from around mile 22 onwards that I likely would have managed to finish in perhaps 6hrs 20min as it really knocked alot out of me, but who knows?

Its my third ultra and I have to say given it knocked so much out of me last year doing the marathon I'm happy with the outcome, who knows....I may do it again next year :)

Whats next?  Well I'm pacing 5hours for the Limerick Marathon so looking forward to that. 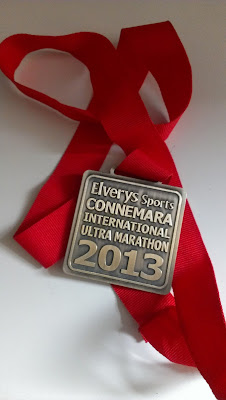