Massive lack of updates lately due to my iMac breaking so I have no way of uploading any of my
runs to Garmin to keep track of things....but I'm still training away and yesterday I ran a half marathon.

This was the first half-marathon being run as part of the annual JJ Reddy 10km/5km race and because it was likely not as hilly as Tullaroan's Half-Marathon course which was on the Saturday I opted for it instead.

The course took in parts of the previous 10km course which I've run in 2012 & 2014 so I had a very good idea about what was involved but it also had an extended loop on the Kells Road to make up the miles (I'll upload a Garmin profile when I get my iMac back).

From previously running the 10km course I knew that it was not going to be easy and it was likely going to be harder then even the Waterford Half-Marathon course which I've had a habit of getting personal bests at anytime I've run it.

Still, with all the above in mind I decided I was going to race this properly and I was finally going to the the sub 1:30 time I've been wanting for sometime now. I needed this as a good test before Dublin at the end of October.

As always during these races you start to notice some familiar faces and I was in good company within the 1:30 pace group starting at the start line, initially the group kept together on the first larger loop but by mile 4 it was starting to split and I think perhaps for a little while I got carried away and kept up with one of the lads from the group and then even raced ahead of him for a few miles.

In hindsight this perhaps wasn't the best plan but I felt good so I went with it and wasn't until the second loop at around mile 8-9 that I started to pay for it because I was heading into some long drags which I knew where going to take abit out of me....and they didn't fail on this.

By the time I hit mile 10 I could hear what was left of the 1:30 pace group behind me and then by mile 11.5 John the 1:30 pacer was beside me. At this stage I was really struggling on the hills and I'd likely have slowed only for John shouted words of encouragement to keep going especially before the turn back onto the last bit of the course towards Dunesfort.

Still I wasn't prepared to finish slow and in the last mile I kept the pace as best I could and even in the last 20metres I gave it one last push and just passed another runner just before the timing matt.

Really happy with the result as its well below the 1:29:57 time I was aiming for, also given the course was hilly it makes me think that on a flatter course I might even drop below 1:29.   134 in all ran the half marathon course and I finished 17th so I certainly can't complain to be in the top 20, that's a nice improvement over my first half marathon time set in 2010 of 1:56:48.

The race was very well organized with plenty of food at the finish even though most of the 10km race had finished there was enough for the half-marathoners which is always a good sign.  Plenty of water during the race (bottles not cups for anyone curious).  I'll certainly try and make it back next year...especially as its just down the road from me. 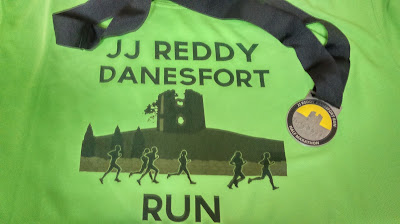 Its really been a boost for Dublin and its making me seriously consider aiming for 3:15 time. Finally the speed work I've been doing since May has paid off and I appear to have both a good endurance base and speed base built.

I have the endurance for the distance (thats not the problem!)...but can I keep the 7:26min/mile avg pace needed for all of the 26.2mile course?  That is the question....
Posted by Barry at 7:15 PM