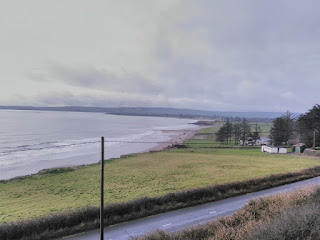 It's been a week and a half of attempts but also good decent long miles under the belt,

Last week on Friday I decided I wanted to do a 30mile run but for a change my plan was to run part of the new Waterford Greenway by doing 15miles out from Waterford City and 15miles back.   This all started all fine as much more of the greenway was completed the my last attempt at running it back in 2016.

However, it was not to be as I got approx 9miles in and couldn't go any further due to construction work so I turned around and ran back to the car and called it a day at around the 20mile mark.

Then last Tuesday I figured I'd try again except this time instead of starting at Waterford City I'd start at the other end of the Greenway in Dungarven. I eventually opted to start near Clonea Strand because parking the car was easier so off I went.....

This section of the greenway has been finished for some time and I also knew that I'd be running through a railway tunnel and running over not one but two railway viaducts, I'd also get a far better view of the Comeragh mountains.   The run did not disappoint as I got all of these and had a cracking day for it too.

I had been expecting wind and rain for the day so dressed accordingly but in the end I ran in a t-shirt and had to take off my long sleeve top after the first 2miles as I was roasting, I had my ultimate direction backpack with about 1.5ltrs of water and I had a small amount of GU gels. I just about hit the 15mile mark when I ran out of greenway due to construction work but I managed to hit my 30mile target although I will say that the last 3miles were a challenge.

During the 30miles I used up all my water but I only took in 2x gels and felt pretty good throughout.
My long term goal with the greenway is to return in April and do an entire out and back run which should result in around 60miles cover, since there's no Vartry 50mile event in April taking place this will be my long run in April instead. 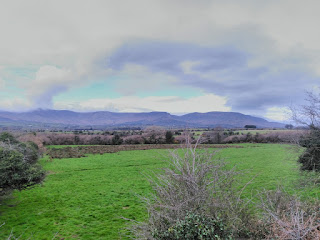 So the question some of you might be asking is what did I think of the greenway, overall it was a good experience?

Most of the surface is either tarmac or compacted gravel, there are a number of road crossing but they are minor roads and I only saw 2 cars the entire time.  Any main roads are either crossed via a underpass or via a bridge which are all specially build as part of the greenway.

I highly recommend the greenway for a day out either as a walking, running or cycling day, you can find my Garmin link for my second 30mile attempt here.