While months back my aim was to run a target half-marathon with the aim of beating my PB of 1:29:33 running this half was very much a last minute decision only taken in the past two weeks and really only finalised when I managed 1:35 on a training run for this distance last week so I haven't been training for a half like I should be.
At first I wanted to run Clonmel but that was booked out for the Sunday so I opted for this instead as it still had spaces and it took place on the Saturday, Saturday arrived and it was time to make my way to Tullamore.     Driving the route to Tullamore reminds me of the times I used to attend the Boards.ie Charleville Photograpghy meetups back in 2008/2009 when we used to all stay overnight in the castle.   You can see a selection of photos I took in the castle on my old photoblog website.

Anyway, back to the running, with a race start of 11am and the fact I needed to collect my number etc it was a 8.00am start for the drive up and for a change I also had the support of my wife Grace which was nice to have for the day. 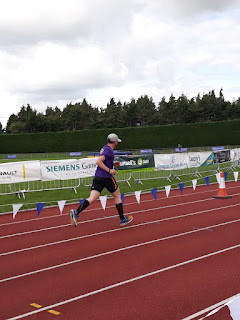 We arrived around 10am and it was off to register, number picked up and it was time to warm up ahead of the race.    My aim of course  to go out with the 1:30 pacers and stay with them until the last mile and then push forward to get a new PB.

11am rolled along and we all lined up to the start line, the race had fully sold out so there was a good crowd really for the off.  We were off a little late at 11:02am and from the start although we were running 6:40min pace it felt so easy, I actually remember thinking if it felt this easy for the entire race then this would be great.

Unlike so many other races where I've pushed ahead of the pacers I stuck right with the two pacers from the very start, this made easier by the fact that the pacers had flags rather then balloons as balloons tend to constantly get in the way of other runners.

To my surprise the first part of the half-marathon was much hillier then expected but I must say the pacers were good for giving pre-warning to various hills recommending people ease off the pace and not to really push on the hills and take it easier on the down hills.    However, by the time we reached the 6mile mark I was starting to feel it and it didn't help that I had stuck with lead 1:30 pacer who was really pushing the pace to the point where the second pacer asked him to ease back, for a short few metres I managed to drop out of the pacing group entirely but was able to catch up with them and stay with them again.

At this point in the pace the pacing group had managed to bank around 40seconds.

By the time we reached mile 10 I was really starting to flag and it was becoming a big challenge to keep the pace.     To his credit the second pacer tried his best to encourage me on as did two Tullamore A/C club runners who tried to encourage me to stay with them but I just couldn't maintain the pace anymore.

By the time I reached mile 11 I could no longer see the flags belong to the 1:30 pacers and I knew any chance of beating my previous PB was out the window completely but I kept up the pace as best I could.

Not the new PB I was hoping for but still a respectable time and place 116th out of 811 people running the half marathon. 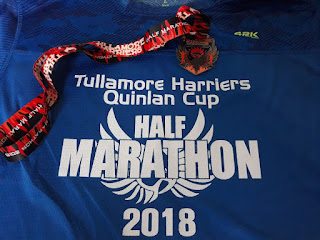 I missed out on the new personal best but to be honest I'm not annoyed, considering I hadn't been properly training I finished in a pretty respectable time and if anything this spurs me on about what I could manage if I really put the head down and thought about maybe trying to knock 1-2min off my half-marathon time.

My garmin of the route can be found here.