This week is a fairly hectic week!

I was due to travel to London for work on Tuesday but even that was touch and go as Daniel was sick on Sunday night and we ended up bringing him to hospital due to very high temp and vomiting which didn't seem to be getting better.    Thankfully his temp came down and he stopped vomiting but it still meant an almost 8hr stint in hospital with him on Sunday night/Monday morning.

After weighing things up and as Daniel was doing much better on Tuesday I headed off to London and arrived Tuesday evening, given it was a work trip and that wouldn't allow much free time to do my own thing without being seriously anti-social with other people I decided to make use of the time I had on Tuesday night and headed off on a sight seeing run around London.

My plan was to run through the City Of London down to Tower Bridge and then run the north bank as far as the houses of parliament, detour to Buckingham Palace and then come back via the south bank.  Other then when I ran the Thomas Path 100 back in 2015 I've not been to London so I figured this was a good way of seeing lots of sights in a very limited amount of time. 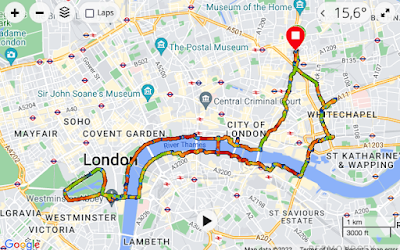 The run didn't disappoint and it yet again reinforces my experience that running around a city is a great way to both sight see and also get your bearings if you plan to do further sigh seeing and trips within the city.  I've done my own running tours in Bruges, Amsterdam and Luxembourg previously and generally on the first or second morning and its always benefited me for the rest of my stay.

I enjoyed the sight seeing but it made me really appreciate that I get to run on nice quiet country roads as I found it very frustrating to have to stop at numerous junctions for roads, bike lanes etc  The City Of London was especially "fun" as I ended up running through it at quitting time so it was packed full of people. I wouldn't like to do this type of running for my normal runs.

During the work trip I unfortunately picked up something which wasn't great as I have a pretty packed weekend as we're celebrating Daniel's birthday tomorrow and I'm running the Dublin City Marathon on Sunday. While I'm just using the marathon as a long run I'd still like to go into it feeling 100%. 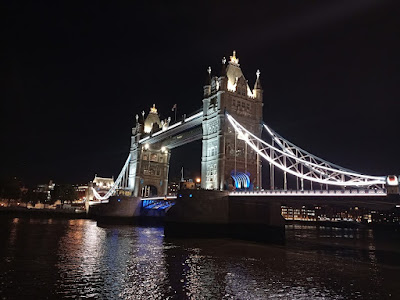 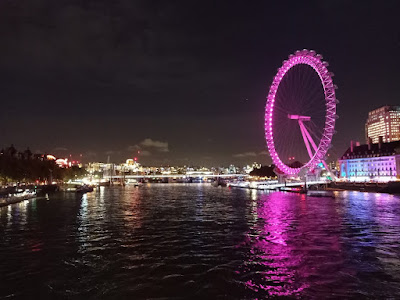