So the big day arrived and it was a early start as i was up at 3am to get ready on the road at 5am and arrived at 7am to register and collect my number.

My wife was supposed to be working today but last min plan changes yesterday meant she wasn't so she came along to support me which meant a 4am alarm call for her (I was very glad of the support).

Felt good if not perhaps abit nervous, the 100km race had already started at 6am and could already see the 20 or so people taking part in that passing the line every 20-30min or so. So 8am arrived and off I went, initially started much faster then expected and upto around the 20km mark I was doing an average pace of 5:17min/km which was faster then I had planned but I felt pretty good so kept it up. 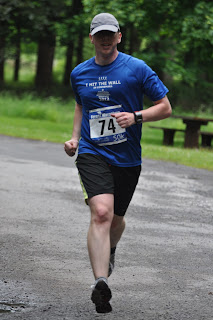 Photo thanks to Peter Mooney

As I approached the 35km mark however I started to feel it in the legs and although had it been a marathon I could have easily pushed on and actually very easily beaten my time for Dublin City Marathon (3:58), for this event I still had another 8km to go after the marathon distance so I didn't want to take the chance, instead I hit the marathon distance at around the 4hour mark which wasn't bad I suppose.

All in all I found the last three 5km laps hard going and this can be easily seen in my garmin log as my average pace increases from 5.30min/km - 5.40min/km mark to 6-7min/km mark from around the 35km distance.

I was determined to cross that line properly at a decent pace so about 1km out from the finish I picked up the pace which felt great and I finished strong across the line.

All in all i really enjoyed the race and whilst I wouldn't do it again next week I certainly would do it again next year, it was well organized and met some interesting people along the route and it was great to support each other. Having my wife with me was a big plus as I was very thankful of the support esp when the laps got harder, of course she thinks I'm nuts for running a 50km but hey its was worth it :)

...and finally proud owner of the 50km medal. 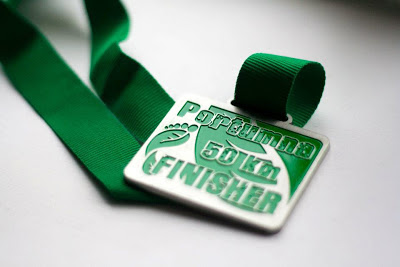