Prep for the Portumna 100km started on Friday when I drove up from Kilkenny to camp overnight in preparation for the 7am start, I wasn't the only person camping of course as others taking part in the 100km, 50km, half marathon and even the race director were staying overnight in the forest.

I won't lie, I was nervous about this race not only was it the furthest I've ever run (beating the previous longest distance by 23miles) but it also was the longest I'll be on my feet for a race as my previous longest race time wise was 6hours 29min during Connemara Ultra last year.

As always I was up stupidly early for breakfast and to get myself ready for the event, breakfast as always was porridge after that I made sure I had everything ready for during the race.   I tried to cover every eventuality with the equipment I had in the box from food, drink to stuff for blisters etc. 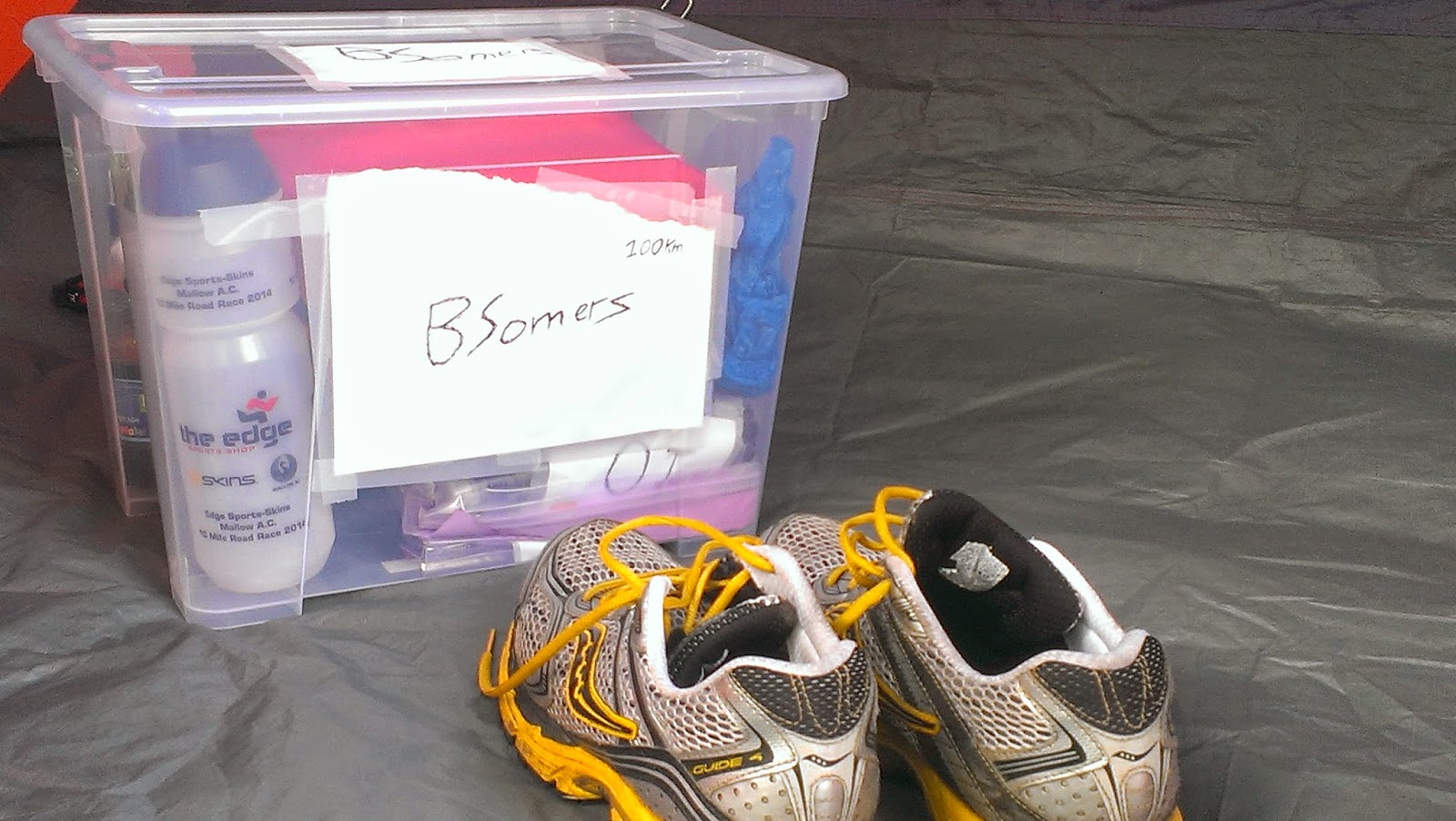 Slight delay at the starting line due to registration delays for some people and then we were off.  I knew that one way or another I was going to be hitting a mile stone on the day as just 5miles in as I would finally hit my 1,000th mile of 2014, around two months sooner then last year.

My aim for the event was to go out nice and slow at about a 10min pace and that went pretty well as I ended up chatting to Paul Brunnock for the first 25miles/or so which was good as it passed the time for both of us. After 25miles I started to flag a little bit and stopped to walk for the first time....this was a little sooner then I had initially planned to walk as my initial plan was to walk for a bit around 30miles.

After this it was a mixture of run/walk, at around 7hours 20min in I had finally passed the 40mile mark and I remember thinking to myself...."here be dragons!".        This was all very much uncharted territory from here on in and it also ended up being a pretty challenging section as I felt very low during the next 10miles or so with a lack of energy and I felt I just kept overheating after around 1mile of running.

During this low period I took on alot more food then I had on previous laps with the hope it would perk me up, I also made use of the sponges at the finish to try and cool myself down and by the time I hit into the 50's the very low point had passed and I thankfully didn't feel so awful.

What also helped during this low period was the support from all the people I've met at other events shouting my name and encouragement at different times during the course. It was good to have a chat with different people throughout the race, certainly made the time go faster and the support was very much appreciated!

One thing I was very surprised about is it took until 50miles for a blister to become an issue for me on my left foot, up until then I experienced no problems and they didn't cause my any pain but at around 55miles I had a blister burst so that hurt a good bit.  I'm sure I gave one person out walking their dog a little bit of a shock as when I passed them I said hello but 10 feet later when the blister burst I shouted "for fuck sake!" from the pain.

By the time I started to approach 60miles I had a blister on my right foot which caused pain when it burst, but neither blisters were an ongoing problem for me thankfully.

At this stage of the race, my legs felt surprisingly fine and I had no trouble with my left IT band which has previously caused issues, one of the worst times being during the Portumna 50km in June 2013 when I ended up adding around 40min onto my previous best time due to the pain.

As I headed into the final few laps I had no idea who was ahead of me and if I'd be very last or anything like that, nor did I really want to know!   Heading into the final lap I decided that I'd try run it all so at least if anyone else was on their last lap I have some hope of finishing before them.

So what felt like a fast pace at time (especially coming into the finish) varied between a 9.00-12.00min pace, I eventually crossed the finish line in 12 hours 13min 49sec (22nd place out of 31 finishers).

Unfortunately I forgot to stop my Garmin for a further 10-15min after I finished so my Garmin stats aren't totally accurate time wise. Garmin log of this event can be found here.

This was my first 100km and the main goal was to finish it, I did have moments where I thought I might manage it in around 10hours but that went out the window when I started walking so early on in the race.

On a side note, as part of my prep for the event I had sorted my food/drink into little ziplock bags rather then leaving things separate. In reality this didn't at all work as I had planned as I found myself not wanting certain items I had put in the bags so throughout the race I'd stop and pick stuff out of the bags, I think this had a impact on my energy levels as I wasn't taking on as much as I needed especially before the 40mile mark.

When compared to Connemara Ultra especialy this year I pretty much took on everything in all the drop bags and that meant despite the hills I felt great by the 26mile mark. Yet for this event I started to lose energy by mile 25 even though the course was far easier then Connemara.

Something to keep in mind next time! ;) 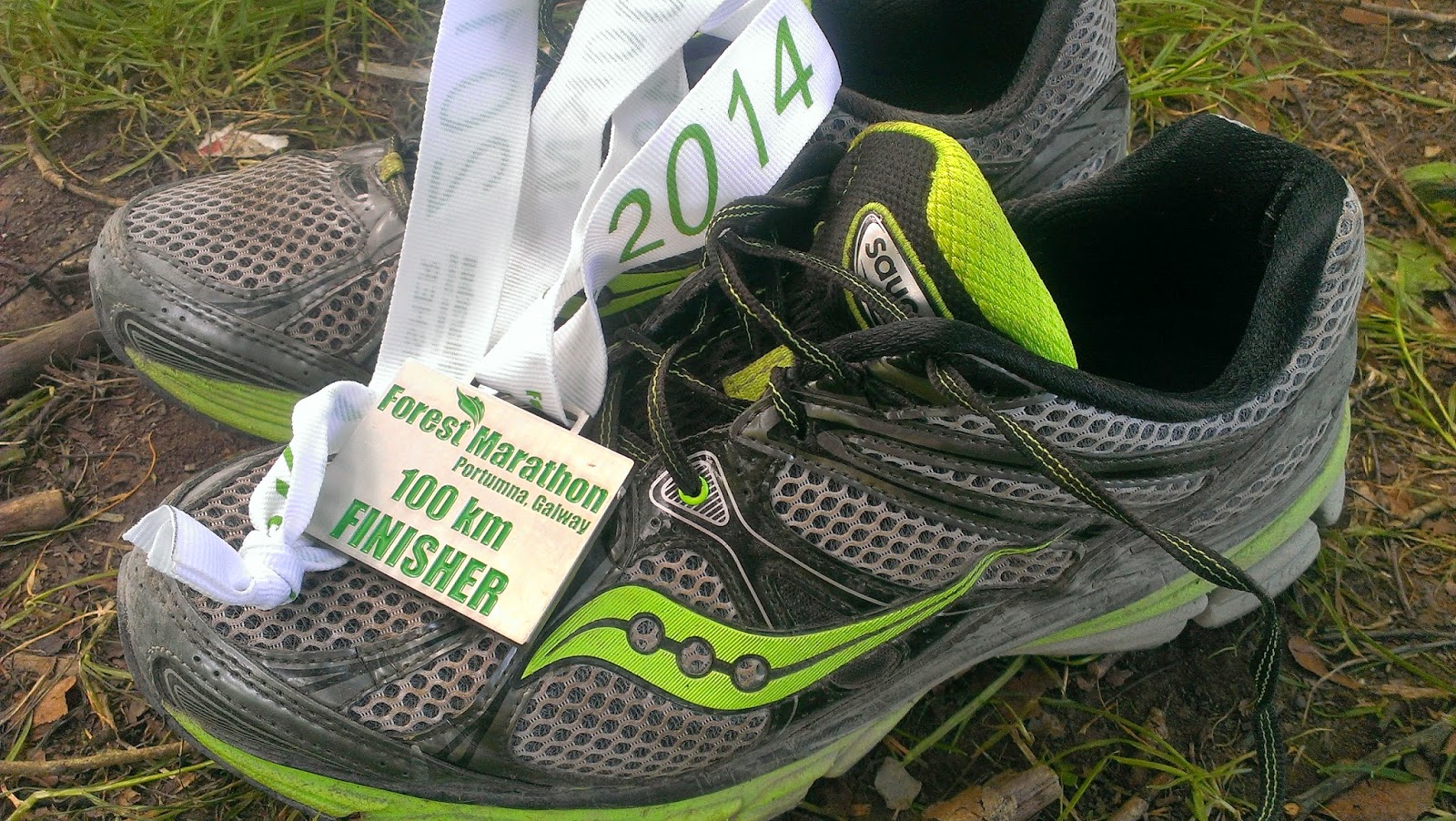