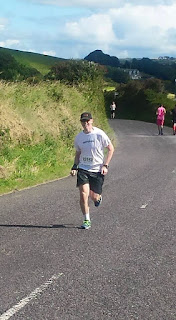 Yesterday I did my first run of the Keith Whyte Waterfront Ultra Marathon III in Co Cork, it was very much a last minute affair as I signed up during the week.

One interesting thing about the Waterfront Marathon is as a guest it featured Team Hoyt who came all the way from the USA to take part in the event, inspiring stuff.

Initially I wanted this to be my 24th marathon with the aim of Dublin in October being my 25th but then I realized the next day that the Keith Whyte Waterfront Ultra Marathon actually was my 25th, oh well.

So instead of the marathon I opted for the 36mile Ultra for a bit more of a challenge, the course also had a 100km Ultra, Marathon and 10km race.   The loop for the three big races was a 9mile out and 9mile back route so for the 36mile event you just did this route twice and you're done.

My initial goal was to run the entire race at an avg pace of 8.30min/mile, my reasoning for this was I previous ran the Connemara Ultra in 5hours 52min and 17sec at a avg pace of 8:53min/mile so I wanted to see if I could better this for a race that was only 3miles shorter.

So I headed off down to Cork very early and arrived at the start line at 7.30min, met a few familiar faces including Vincent who is the race director of the Tullaroan marathon here in Kilkenny.

Before everyone headed off at the start there was a warm welcome for Team Hoyt and they started off just before everyone else, with the exception of the 100km which started at 6am the rest of the races started at the same time and so I headed out for the first loop of 18miles and for the most part I kept to plan for the first 10miles or so but as I felt good I ended up upping the pace and eventually dropped my overall avg pace to 8:11min/mile. Far faster then I had planned but I felt good so I kept things up.

The first loop went great and I felt I made great progress as I lopped back and headed out for the second loop but by the time I approached mile 24 the wheels started to come off and the pace had really started to drop off, by mile 25 it had dropped further and I was down to 9:00min/mile.

Although by the time I hit 26.2miles I had actually run my 3rd fastest marathon by running it in 3:41 I knew my pace goal was totally out of the window!

Really I only have myself to blame for the wheels coming off as I got too cocky far too early on in the race, really silly mistake to make.

Despite this I still managed another improvement as I hit the 50km mark in a time of 4:38:51, this beats my previous best time set at the Donedea 50km in 2013 of 4:49:33, not a bad improvement considering I still had another 5miles to go in this race.

In the last few miles I found that my calf muscles were cramping up (not something I usually experience) and I had to stop and stretch a few times to relieve the pain, I also ended up walking a bit.  I did eventually however increase my pace for the last 1/2mile to a respectable pace of 7:39min/mile.

My finish time was eventually 5hours, 41min & 04sec, the split times from the race mats can be seen below (click to enlarge).

So the plan is now to get back into training for Dublin and perhaps do the odd 10km or half marathon between now and October. Although I got carried away during this race and it cost me my pace goal it still really helped my confidence to see a 3:41 marathon time as part of this race and it makes me think that if I had actually raced the marathon distance I would have easily beat my current marathon PB of 3:33:33.   This gives me a fair bit of confidence when heading to Dublin in October. 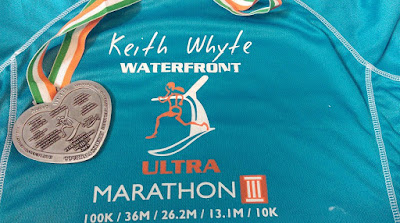