I almost didn't run the Dublin Marathon this year as I could feel the unset of what kind of started to feel like a chest infection during the week but it never seemed to fully develop, but to be on the safe side I went into recovery mode and took anything I could that I thought might help and rested as much as I could.

Luckily prior to Monday I had three whole days off so outside of going to the RDS on Saturday to collect my number I didn't have anything else planned and was able to rest to allow myself to recover!

As of Sunday night my breathing and lung function "seemed" to be fine and I have no unusual aches or pains so it appears I might have stop the unset of something worse, but without a doubt I've been run down the past 7-10 days.

But I decided I'd still give the marathon a shot (this may not have been the best plan) and so I drove up on Monday morning, before the start I met up with one or two of the pacers including Don the race director of the Vartry races in Wicklow and also Paul who was pacing 3:20. Unlike previous years my plan was to stick with the 3:20 pacers (there were 3 in total) and not to get over confident and go off in front of them.

From the start the 3:20 pacer group broke into two parts with one pacer running about 50metres - 100metres ahead of the two others, this certainly helped to spread out the crowd a bit more and although initially the head pacer was running slightly faster miles to create this gap spreading out the group was certainly a good idea.

Despite the weather still being breezy surprisingly the Phoenix park was very calm as we ran up Chesterfield Avenue with only the odd bit breeze pushing across, the conditions otherwise were perfect as it was relatively cool, little or no wind and no rain....certainly a change from last years warmer conditions.

Conditions after that varied with a strong'ish breeze now and then, I learned from previous races and I wasn't out in front anymore, instead i stuck myself behind somebody to try and conserve my energy by letting them do the work.

By the time we hit the half way point I was however starting to feel tired so I took on another gel and that gave me a small boost, but by the time I hit mile 18 I think it might have been the first time Paul mentioned to me to keep the arms moving.

Things didn't vastly improve after that during the ascent of a small hill at mile 20/21 I again started to run into difficulties and although once again Paul did his best to encourage me to get up the hills I just felt like I had a total lack of energy and then the problems really started to start! My left IT band started to cramp really badly!

Due to the cramping I ended up stopping and walking, I tried to stretch it out and it helped a little and I started running again as I the 3:20 pacers were maybe 200metres ahead still so I kept up for a further 500metres but then my right leg started to cramp along with my left calf muscle!    At this stage I knew I was in trouble as I never normally experience cramping this bad.

I walked for abit and tried to stretch things out and while I was able to run a short distance again things would start to cramp up and then I also started to also experience a very painful stitch on my right side.

At this stage I figured my issues where down to either A. I still was sick or B. I still hadn't fully recovered from being sick and either options were likely affecting my breathing which was likely causing a decrease in oxygen intake causing the cramping and stitch, not a great situation overall.

The rest of the miles were made up of walking very slowly and running short distances, although I did manage to run the last mile nonstop to finish in 3hours 51min 6sec. (Garmin of the run) 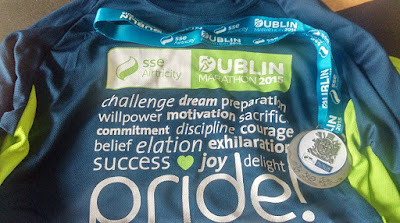 Overall a frustrating experience given I was bang on target until mile 20, in reality I likely shouldn't have run the Dublin Marathon or instead perhaps chosen a slower time like aiming for 3:30, but then who knows I might have experience the same issues running for that time also.

But then as anyone that reads this blog knows I'm awful stubborn when it comes to stuff, while I can push myself through hours of running or walking with painful blisters. Unfortunately in this case I couldn't push past the muscle cramping to keep any sort of reasonable pace....what I wouldn't have given for some blisters instead!

The outcome could have been worse of course so I'll take what good i can from the race including that I am very confident I can get that sub 3:20 time...provided I'm not trying to get it when sick or still recovering from being sick.

At this stage I still want to get the sub 3:20 time so I might pick a marathon in the next few months that I'll race in order to try hit that time, I don't want to wait until Dublin near year which is historically the only marathon I actually try and race.