Last weekend was my second running of the Vartry 50mile Ultra and overall it was certainly a more positive experience then last years despite the lack of training going into the race.

Before I even traveled to Wicklow for this race I always had in my mind that I honestly didn't care about the time, the aim was merely to put time in the legs and I expected to finish in between 10-12hours due to this.

As always it was an early start from Kilkenny as I left just before 3am to arrive with plenty of time, driving through Glendalough didn't look particularly good as there was seriously heavy rain but as I got closer to Roundwood things started to clear up abit...but still the forecast for the day was pretty much rain so I had ensured to bring changes of clothes just in case I needed them.

By the time I had arrived the 100mile racers were already out for around 10hours, I chatted to Dom the race director and various other runners before the race.  As always some runners I'd never met before but there's always a few familiar faces that are always good to see at ultra events and its always enjoyable to share experiences.

Just before the start I met up with JP & Paul who also ran this race last year and who I planned to run the event with, the basic plan for the day was take it relatively easy, have a chat and just tick off the miles and use the whole race as a training run.   So off we went bang on time and he started to endure the rain.

Unfortunately despite the weather forecast showing breaks in the rain before 9am and before lunch time this didn't happen and the wind and rain kept up for pretty much all of the day, so this meant every so often I'd also have to remove my gloves and wring the water out.      Still, despite the rain and wind only my hands and face occasionally felt the cold and I wasn't worried about getting too cold.

The 50mile route consists of 5x 10mile looks with some small out and back sections in order to give an even 10mile on each lap, I've done ultra's before of 5km loops and I honestly find them unbearable but doing 10mile loops is actually fine. Its a nice distance to have for a loop whilst still allowing you to pickup food, clothes etc at the start/finish area.

As time passing went the race flew, although to many such a long time on the feet might seem endless and crazy I honestly found it went seriously fast which was no doubt down to the fact that myself, JP & Paul chatted and joked for basically the entire race.       It was also great to meet up with others taking part in the race to cheer them on and just said hello, shouts out to Ray who also won the 50km race.   I even met up with a fellow ultra runner blogger who's blog I read.

As the loops ticked by I decided that unlike last year I wasn't going to bother with changing socks at the 30mile mark as my feet felt fine, so instead I just changed my t-shirt and long sleeve top and off I went again.

By the 40mile mark I decided I felt pretty good, in fact I felt far better then I felt at this stage back in 2015 so with around 1hr 50min to go I decided to see if I could beat last years time of 10hrs 10min and run the last 10miles....sorry JP & Paul for abandoning you :)

Whilst I did run a lot more of the last 10mile then I did the 30-40mile section I missed out on beating last years time and finished in 10hours 22min 43sec.  Still, I'm not at all disappointed considering I wasn't planning on setting any specific time, the reality is I'm actually surprised because I finished in much better shape then I did last year so that's a nice boost for my confidence. 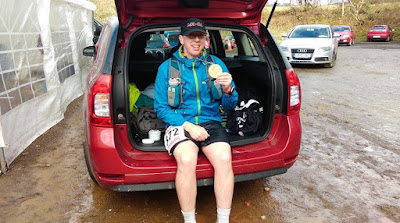 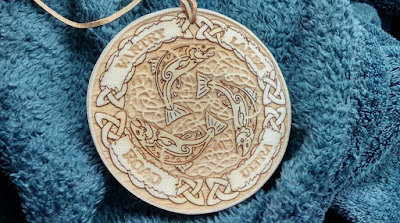 Finally, for those interested in taking part in the race next year you might be interested in the garmin profile of the race (compare this to the original 2015 looped course which started and ended in Roundwood). I've also included elevation profile and loop profile below:

Miles This week: 69 miles
Miles this Year So Far: 430miles