Welcome to another race report, this time for Tullaroan's third year of operating 5km/10km/half and marathon races, except this year they added another loop to make a 39.3mile course after Tullaroan AC had received numerous requests in the past for the addition of an ultra course (Thanks for listening guys).

As mentioned in my last blog post its been a few years since I've run a 39.3mile course so I decided the goal for this race was to race it and try and set a new personal best by beating my previous time set in 2014 in Connemara of 5hours, 52min, 19seconds.

With that in mind I did a pretty easy week of running before hand and off I went bright and early to Tullaroan and even at 6am it was looking like it was going to be a very hot day at the races.
The Ultra kicked off with 7am along with the very early start marathon runners, I settled in with an very easy pace of around 9:40min/miles for the first 7miles and ended up talking to Paul Brunnock about this and that, this was useful as I could to ask him about his experience previously running the Connemara 100.
By about the 7mile mark Paul stopped at one of the water stations but I continued on, it was around this time that I realised that I was running a far too slow pace and I was clearly taking it too handy as I needed to average under 8:52min/miles for the entire race to set a personal best. So I upped the pace. Including the initial slower and faster pace I increased to, I eventually finished the first 13.1miles in around 2hrs 5mins.

On the second loop I knew it was going to be a somewhat lonely loop as the proper marathon hadn't started yet and the very early marathon runners and ultra runners were well spaced out, I did however still manage to meet a few early marathon runners and it was good to chat to a few of the other runners and as always it was good to see some familiar faces from people I've met at other events.
I finished the second 13.1mile loop in 1hour 50min which was a nice speed increase on the first loop.

At the beginning of the third loop I stopped at the crossroads in Tullaroan to refill water and get a few things to eat and at the same time the half marathon kicked off so I wasn't going to be on my own for the last loop.
Initially I must admit I got somewhat carried away and upped the pace to pass many of the half-marathon runners by weaving in and out of the crowd, but I did eventually slow down after I realised this.  Among the crowd I did however meet a few familiar faces also including Paul who I ran with during the Vartry 50mile back in March of this year.

By the time I started hitting the 30mile mark I was beginning to pay for getting carried away and the legs started to rebel on some of the hills so I was forced to walk.  I was however again able to make full use of the downhills and I was using this to leap frog half-marathon runners who I'd catch up with and then I'd lose them again as I was reduced to walking again.

By the time I hit the 35mile mark and the water station at Valley Inn I decided stretching might do me some good, this however was not to be the case.  As soon as I lifted my left leg to stretch it my right leg had a painful cramp and I collapsed to the ground.  Once on the ground my left leg then also decided to have a painful cramp as well so I was experiencing a fair bit of pain in both legs.
I'm sure this was a worry to the people looking after the water station and when they asked what I needed I just said I needed a help up, so after a lot of pain standing up and walking for the first 100 metres or so the cramps went away and I was able to run again thankfully!

The last few miles were somewhat of a slog as that section has a number of climbs which you have to endure but I still ensured I ran as much as I could as I had spotted another ultra runner who I was determined was not going to pass me as up until now no other ultra-runner had passed me during the race.

Once the hills were over I took as much advantage of the relatively flat road as I could but by now I knew I wasn't going to set a PB as 1mile out I had already hit my time of 5hours 52min. This was somewhat frustrating but I was dead certain that the Tullaroan course was much hillier then Connemara (see my comparison below) and the conditions were seriously hot (for Ireland anyway!).

Coming up to the finish I upped my pace and finished in 6hours, 3min and 36seconds and ended up being the 4th male to finish the Ultra.  This is by far the closest I've come to a "podium finish" for a large race and I'm thrilled with it! :)

At the finish it was great to see a number of club members from our local club Callan AC who despite some very challenging conditions and a such a hilly course had set some excellent times. For some of the others it was their first time to complete a 10km race. 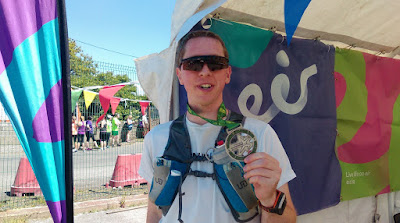 Overall I must say the Tullaroan Race events have gone from strength to strength each year I've ran it and I think I heard that this year they had over 600 runners which is certainly a massive increase from the first year. Organisation and facilities before, during and after the race were also very good with plenty of water stops.   It was also a nice touch to offer three different medals for the 5km, 10km/half-marathon and marathon/ultra events.

The timing of the races also worked out well as the roads weren't too crowded and it was really nice to get the support and company of the half-marathon runners on the third loop of the ultra, it also helped that Ultra runners had a sign identifying them (this is something I've seen previously for the Connemara Ultra (see example picture)

So now the race report is over, just exactly how does Tullaroan's 39.3mile course stack up against the Connemara Ultra 39.3mile course, without a question Tullaroan is far more challenging course with more hills and over 200 extra meters of gain over the entire course.
You can see the courses compared below (click for larger image):


For those interested you can also see full Garmin profiles of both Tullaroan Ultra and Connemara Ultra course (Connemara Ultra was recorded in 2014 but remains unchanged since).
Would I recommend this for race somebody that wanted a challenging 39.3mile Ultra, most certainly :)

Miles This week: 67 miles
Miles this Year So Far: 788miles