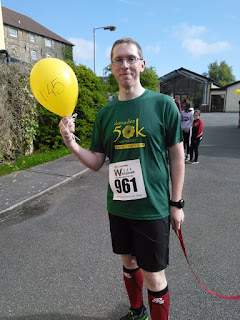 Back on the 23rd April, I ran the Wexford Half marathon, but there was no tapering before it and there was certainly no personal best set during the race as this time I was pacing the 1:45 finish for a change.

It's been awhile since I've done a pacing job and it was nice to do one again, I've previously paced 5hours at the Limerick Marathon two years in a row and decided it was time to pace another event but this time I opted for a half marathon event instead at an event much, much closer to home!

The last time I ran in Wexford at this marathon I busted a gut trying to get a PB and I did by finishing in 1:42:07 which I was certainly happy with at the time. So this was going to be a refreshing change where instead of pushing myself I could instead get in a handy training run.

Myself and Grace headed down to Wexford bright and early on Sunday and when we arrived it looked like it was going to be a pretty cool day. But by the time I had picked up my number and pacing balloon the clouds were starting to break.

I met up with Michael who would be the second 1:45 pacer and we headed down to the start line, but the time we reached the start it was looking like it was going to be a very warm day!

The day did not disappoint and It certainly warmed up during the race, it also didn't help that I missed picking up water at two of the water stations...but I was more concerned with letting others pick some up.

Although we had a group at the start this seemed to drop off a bit especially in the last 3-4miles of the half-marathon but we still got a few people home under the time and I was happy to finish in 1:44:33, about 10sec earlier than planned but not too bad overall. 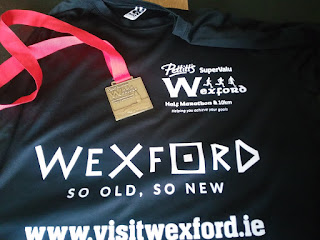