Welcome to another race report, its the June bank holiday weekend and that means the Tullaroan Half/Marathon & Ultra took place on Saturday.

This is the forth year that Tullaroan AC have put on a 5km/10km/half & marathon races. Last year they added a 39.3mile Ultra for the first time after previous requests for the distance and you can read all about my race report from last years running of that course here.

It's been exactly a year since I ran a 39.3mile distance and prior to last years run I hadn't run this distance since Connemara Ultra in 2014 where I managed to finish in 5hrs 52min 19seconds.

Last year in Tullaroan after running part of the third loop way too fast and experiencing a good bit of cramping from the 34mile mark onwards I finished it in 6hours, 3min and 36seconds and came in at 4th place.   I was determined to improve on this and maybe, just maybe finish top three!

As always it was an early start for the Ultra as it set off at 7am, it was a small enough field with only 13 taking place and I got number 12!

This year I had opted to take on less food during the race and to only carry 4 gels and because I hate carrying water in my hand, I opted to use my Ultimate Race pack for the day.
In all honesty I didn't need the race pack and I could have just dropped the gels at certain points before the start but I didn't bother.

We were off at 7am and it was a slow and steady start with the aim of averaging an 8:30min/mile pace for the entire race. For the first 4miles or so I was chatting to a few people but after that I was pretty much on my own for the rest of the day.

I knew from this early stage in the race that I was actually in 3rd place (overall) and 2nd place (male) as both the 1st place male and female had raced ahead of the main group after the 2mile mark and we lost sight of them.

Although I had set the goal of running an 8:30min/mile avg pace early on I had noted that I had run the 1st loop at an avg pace of around 8:20min/mile so I opted to slow things down a bit and do my best to stick to my goal pace on the second loop.
This started well enough but I pretty much knew anyone I was spotting behind me after the 13mile point was also part of the Ultra as both the 8am & 7am marathon starts were in front of me. After spotting somebody at around 15miles I kept the slightly faster pace but I did drop it down to around 8:23min/mile average.

By the time I hit the 26mile mile mark I felt I was in decent shape, unlike last year I completed my second 13mile loop ahead of the half-marathon start who I had actually met up with just as I started my 3rd and final loop. I did however meet some 10km walkers and on some of the hills I ended up walking and chatting to them from the 28mile mark as the hills were starring to really effect the legs.

Still, I didn't forget I was in a race and I knew I was still in 2nd place for male finish of the Ultra so this spurred me on. I passed the 31mile (50km) mark in 4hours 31min which was a personal best for this distance and eventually the half marathon runners started to pass me coming up to 32miles.

Still, it wasn't all bad, but the time I hit the aid station at the Valley Inn I was still in pretty good shape and unlike last year I didn't cramp up and end up on the ground, thats always a good thing!

Shortly after the Valley Inn from around the 35mile mark it was a run/walk to the finish, although I didn't know it at the time one of the male Ultra runners past me between the 35 and 37mile mark, at least this is when I'm pretty certain they passed me as from 37mile to the finish line nobody else passed me and prior to this I had kept an eye on the race bibs for the people passing me. I pushed it on for the last 2miles and I kept up pace with one of the half marathon runners I finished the last mile in 7:51min.

As I crossed the line I was pretty sure I was top three but I wasn't certain if somebody had passed me or not while I was walking so I checked things out with Vincent the race director and was delighted to be informed I came in as 3rd male for the Ultra.

Considering I came in 4th place last year I'm very happy with this results and it'll be my first top 3 finish for anything other then a 3mile race I once did a few years back.

As always you can check out my Garmin of the race here and you can see the full race results on the myrunresults website.

If you're interested to know how this 39.3mile Ultra compares to the Connemara Ultra held in April each year check out last years race report. 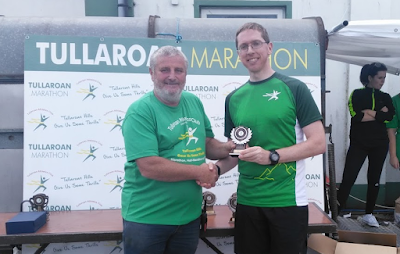 As always, an enjoyable event put on by Tullaroan AC, well organised and plenty of stuff at the aid stations. Thankfully it wasn't as warm as last year but the course will always make it challenging!