Although the Waterford Marathon has been on for a few years I've decided this year will be the first year that I'm going to do it. However its not a "goal" race and I never planned on racing it and finishing it in any specific time, instead I'm going to run it with a difference...

How, You may ask?  Well, thats mainly down to how exactly I'm going to get to the marathon start line. Origionally I was planning on treating it has any old race and arriving as normal but as this is a local race I've instead decided to run to the start line.

If you know your geography you'll know this isn't a 5 or 10mile run however, Waterford City is approx 31miles from Callan via the old N9 road, so this means I'll have to run 31mniles before the marathon and then run the 26.2miles of the Watrrford marathon. It's a big ask and its going to mean a very, very early start to the day.

I've run the 31mile route to Waterford twice already so I know I can do it but the challenge will be then to run the marathon afterwards without walking and to push me I plan on sticking with the 4:30 pacers.

So here's the plan, it's going to be a 2/3am start which will allow 6hours to get down to Waterford City, this will mean 11:30min/mile pace for the 31miles. To finish the marathon in 4hours 30min this will mean a avg pace of 10:18min/mile so its going to be a challenge to up the pace to complete the days 57miles.

Few people I've mentioned this to have asked do I plan on running home afterwards...no, certainly not. I think 57miles is enough for the day.

Waterford Marathon takes place on Saturday the 24th June, It's going to be a challenge thats for sure but its an ideal very long training run for what I have planned later in the year. 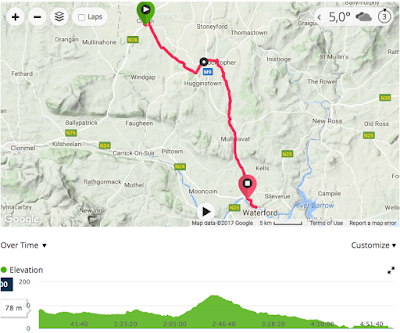