First race of the year back on the 9th of February and I was all set...well almost.....I hadn't been feeling 100% the entire week before so I knew I was fighting off something but I decided I was doing it anyway as I've had this feeling before and I've been fine

Saturday morning arrived and its about a 90min drive to Donadea Forrest so it was an early enough start to arrive with plenty of time and to register for the race start at 10am.


After not going to many races in the last few months it was good to once again see so many familiar faces and before everyone knew it it was 9:45am and time for the race briefing.   Now for those that haven't been to a race with Anto as the race director you are missing out.   The briefing is pretty straight to the point and no messing about, it boiled down to:

- No Headphones!
- No littering, use the bins!
- No headphones, if you use them you are disqualified
- Do 10 laps of the 5km course within 5hours and then fuck off home
- No headphones! 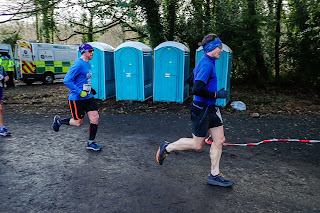 We all started off at around 10:01am and at the start I was about 40seconds plus ahead of the 4:30 pacers on the entire first loop, but I started to slow down throughout the loop and by loop 2x I could see them right behind me.

All felt good initially but by loop 3x I had to stop for toilet break and I then lost the pacers and spent lap 4x chasing them.  The muscles in my left leg then started to get fairly tight and I knew this was going to be an issue.

I continued on and got chatting to various people but the day still didn't feel right and I was beginning to really feel the effort.   By the time I started hitting the mile 18 mark I knew I was in awful trouble and decided I had enough, I wasn't slogging it out for the remaining few hours/miles and I was calling it a day!

At mile 21 I called it a day and looked for Anto at the start/finish , Anto was happy got me to pose for a Loser/DNF photo and it was as simple as that, my first ever DNF.

Overall I managed a slower pace then I wanted for the race upto then of 9.14min/mile, further information can be seen on my Garmin of the race.

I didn't hang around once I dropped out and picked up my drop container I have left just after the finish line and I headed to the car.

The next day I got onto the physio (Bodymend) and arranged to have some dry needling sessions to sort out the IT Band and as always it did the trip.....but as always the sessions were far from pain free. They did the trick however and I was back running shortly afterwards.


Was dropping out the right thing to do?
It was a hard decision to make as it was my first DNF, I feel perhaps I'm less stubburn then I used to and I feel I put this down to trying to pack it in during Connemara 100 2017 race.   Prior to this race I've always refused to DNF no matter how much pain I was in and I was discribed myself as either too stupid or too stubborn to DNF.

None the less, it was the right thing to do. My right IT band wasn't in good shape and took a few sessions of dry needling to put right afterwards.  I

feel it also effected my running style as afterwards I ended up with another muscle injury in this month during a 30 mile training run prior to Connemara Ultra 39.3miles.
Posted by Barry at 11:58 AM