Long and short of the last few months is got I Covid back in January and it did a number on me, few
weeks after I had it I still had very little energy and running what should have been a easy 3miles was like a hard 15mile run.

This of course ruined my plans of a 50mile race in May which I have postponed until 2023 as I lost a lot of fitness and couldn't continue to do the training I needed.

Things are very slowly going along now, I have an entry for Dublin in October which has carried over from 2020 so I opted to make some effort on training and I signed up to the Boston Scientific Half-Marathon in Clonmel which was on the 28th August.

I've done this race a few times and its not what I'd describe as flat, but they changed the course this year and have promised a flatter course.

The course started in Clonmel and then looped back to Kilsheelan via back roads before going onto the Suir Blueway and coming back to the finish. I've run and cycled on the Blueway a fair bit over the last 18 months or so so I knew what to expect there but I had no idea about how the route would be on the roads to Kilsheelan.

Few miles in and I knew this course wasn't going to be very flat, or at least it wasn't going to be flat until I reached the Blueway.  You can see from the elevation profile below that it certainly had some climbs, but for everything that goes up it also must go down so there were some enjoyable downhill sections.

I managed to keep a fairly respectable pace throughout most of this section but by the time I hit the Blueway at Kilsheelan I was starting to feel the strain of maintaining the pace.

Up until the 7.5mile mark I only had maybe 3-4 people pass me so this was a good sign, but on the Blueway this changed and I maybe had a good 10 people pass me. This was a little demoralizing as I've not had this happen in sometime when doing a half marathon distance.

But I kept going as best I could and tried to run based on effort rather then checking my actual pace on the watch. Coming up to the finish I managed to pip two people so thats always a boost!

It's far off my PB of 1:29 and prior to January and getting Covid I could have pulled this sort of pace out of the bag on a training run so I have a lot of work to do to get back to that sort of fitness. But its still better then I expected just the same.

Long sleeve finisher shirt after the race is decent quality and it'll get some use during the winter months no doubt and for those into medals its an alright medal. 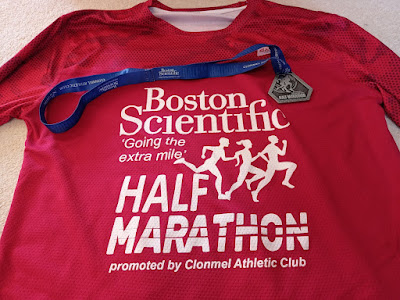