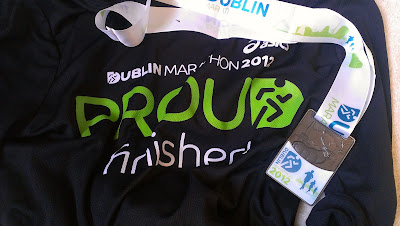 My second attempt at the Dublin City Marathon and I was as nervious but still looking forward to it as any other marathon I've done, I was looking to knock what I considered a sizable amount of time off with this marathon and I was pretty sure I was ready as I was ever going to be,

However, that still didn't stop me getting sick during last week and spending Sunday in bed hoping that I could reduce the affects of being sick on the actual race.

So I started off with 3:30 pacers and stayed with them pretty much without much problems right through the Phoenix Park and beyond, have to say found the first three water stations pretty chaotic as a number of runners just ran right across people without evening looking, after that they got alot less chaotic.

Although water stations are generally somewhat chaotic for big races this race seemed worse then others I've experienced,

I felt good coming up to half way point and was maybe 5-6seconds ahead of the pacers until around mile 15 at which time I settled back into the group as I was beginning the struggle.

At the mile 18mark the wheels started to come off and I was dropped by the pacers and ended up around 200-300metres behind them, after the 18mile mark there's a small hill at which time my left leg started to cramp in a big way as I headed up this hill and it was agony,  I ended up stopping and stretching sooner after to try relieve the pain somewhat.

The muscle pain basically set the remaining part of the race as I'd manage perhaps 1mile at a time and the muscle would cramp again and either I'd keep going through the pain for a little while longer or I'd stop to stretch it out again at which time I might last another mile.

Mile 23 onwards felt pretty endless and it didn't help that I didn't see the mile 24 or mile 26 markers at all, from mile 25 I gave up stopping to stretch and just ran through the pain.

Around 800metres from the end I spottred a guy dressed as a clown with two red bollons, this guy stuck in my head as I actually had passed him and spoken to him somewhere in O'Connell street earlier in the race.....at this stage I was determient as hell that I wouldn't be beaten by a clown!

So I upped the pace and finish in 3hours 41min 44seconds with average pace of 8:28 min/mi, previous personal best was 3hours 58min and 33seconds so I'm very happy with the outcome :)