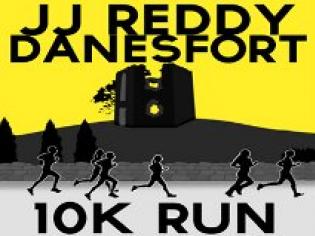 I've not done a 10km race since back in June so decided to give it another crack and see how I'd go, so I signed up to the JJ Reddy Danesfort 10K Road Race in Co Kilkenny.

At first I thought the race would be a handy one but as i drove to the start line I realized just how hilly the route would be so I decided that perhaps my hopes of setting a new PB for a 10km distance might not be so great....

Race appeared to be somewhat disorganized at the start which was frustrating but once it got going managed to loose most of the people, straight away I could see the hills were going to be abit of a problem.

I gave it all I got anyway and found it awful hard until around the half way mark at which stage the hills were less of an issue, at around the 7km mark I passed around three people which gave me a good boost as I had them infront of me since the start.

Around 1km from the finish a chap came along side me and I managed to keep pace with him for a good 500metres but the last hill before the finish really was hard going so I lost him, he was the only guy to pass me.

All in all I shaved approx 1min from my PB...however I've yet to see the official chip times.  Garmin time of 44:22.