Another year and another Dublin Marathon race report, as your all aware I've been doing next to no running since Connemara 100 due to injury and although I did manage 1-2 20mile runs I managed next to no other runs and this wasn't a very good base to run a marathon. But none the less I had signed up and paid anyway so I decided I'd give it a go anyway and take it easy.

At least that's what I initially told myself....who was I kidding right??

What started as me thinking to myself that I'd do it and take it easy eventually evolved into me planning to head out with the sub 3.30 pacers and see if I could beat the 3:33:33 PB I set 3 years ago, even beating it by 1second would be an improvement after all.

My last two previous attempts to beat this PB have been a washout, back in 2014 I fell on Slievenamon about 3 weeks before the marathon and I bruised my ribs.     The day after the fall it hurt enormously to just breath so I went to the doctors and ended up getting an x-ray to rule out a fracture.

Thankfully I didn't have a fracture but by the time Dublin rolled around I still wasn't 100% and 10miles into the race I was in a fair bit of pain so I could no longer maintain the faster pace so I resolved myself to use the marathon as a training run.  My goal of a new PB died with this decision.

Last year I actively trained for Dublin from the end of the July after I had recovered from the 100mile in May, things started well by me setting my first sub 1:30 half marathon in September which gave me a good boost and made me think I could pull off a sub 3:20 time at Dublin but once again things were not meant to be.

By the time the marathon rolled around I wasn't feeling the best that weekend but I still went ahead with my plan and ran anyway.  I got as far as mile 21 and the wheels feel off, I could only describe that the rest of the race was a utter slog to the finish.  In hindsight I hadn't respected the amount of time I needed to recover from the 100mile in May and I should never started my training for Dublin.

So this time around I decided I'd go for a more conservative sub 3:30 by heading out with the sub 3:30 group and see how things went, I figured there was a good chance I'd pull it off and if things didn't feel right I'd drop the pace right down and convert the race into a training run.

Before the start I could tell my mind wasn't really in it as I first left my gels in bag which I dropped at the baggage area and after I went back and got them I then left my gels in the toilet...thankfully I managed to get them back though.

Eventually I was ready to start and I headed off to the sub 3:30 pacing area where I got chatting to the pacers.    The start I found was very different to previous years as I found that the field was much more spread out crossing the starting line, this was no bad thing as in previous years it made the first few miles a pain to navigate around slower runners and road obstacles.

From about the 3mile mark I had spotted the very familiar looking colours of the Saturday Road Runners from Waterford who happen to have the same club strip as Callan AC, they were just ahead of the 3:30 and they were staying together as a group so for the next 15miles or so I kept in with them on and off.

About 6miles in I met fellow Kilkenny man Ger who's also part of the same trail running group I'm part of in South Leinster, he looked a lot more comfortable with the pace he was doing then I felt I must say. We chatted for a bit about this and that.

For the most part I preferred to stay away from the main sub 3:30 pacing group for two reason, the first being that the very large group of people around them really annoyed me and the second is I used the pacing group behind me to spur me on so I wouldn't as easily be passed by the group.  Eventually I created so much of a gap between me and the pacers that anytime I looked back I couldn't see the balloons.

At the half way mark it was a 1:44 half marathon and I was still feeling pretty comfortable, by the time I got to heartbreak hill however I was beginning to suffer and I eventually lost the Saturday Road Runner group, but I was no where near as bad as I suffered last year where shortly afterwards I was forced to basically walk to the finish.

By about the 23mile mark to maintain the pace was starting to be a problem but I looked around and I could see the 3:30 pacing group around 100metres back so this spurred me on to keep on moving, I knew I could afford to loose a few seconds and still be 3:29:xx but I ideally didn't want the pacers to pass me anyway.

On the last mile coming upto the finish Ger met me again and despite his encouragement I couldn't keep up with him, approaching the finish I did the silly error of also upped the pace at around the 800metre mark from the finish line which was much too early and so I finished across the line much slower then I would have liked.

All in all however I finished with a new personal best of 3:29:06, this beats my previous marathon PB set back in 2013 of 3:33:33 which I've failed to beat the past two years when specifically aiming for a sub 3:20 marathon. It felt great to finally get a new PB for the marathon! :)

My Garmin profile for the race can be found here. 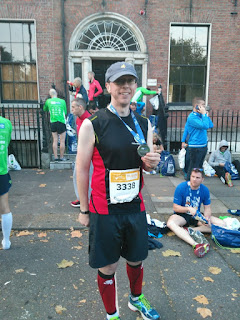 Given the sheer lack of training I'm very happy with the end result as I only really managed a hand full of short runs and 2x 20mile runs since August.   However, I will say that the lack of training is seriously noticeable after the race as my legs are aching a lot more then they usually would. They felt better after the Vartry 50mile back in March by comparison!

Dublin had over 19,500 runners taking part this years which makes it I believe the 4th largest marathon in Europe and this increase in runners I felt was also reflected in the support from people on the race route. The good weather conditions also likely helped but there seemed to be much bigger crowds this year compared to previous years I've run.  All in all it was certainly a good day and I've no doubt I'll be back again.

So thats it, next race after this should be Stook 10mile Roadrace in Co Kilkenny in the middle of November.