Since Dublin I've thrown in some long runs of 16-17miles and about three weeks ago I did my first trail run in months!      Rather then my usual playground of Slievenamon and headed off with South Leinster Trailer Runners members Jaime and Paul to the Galtees for what was a short run of 10miles but it took in some very steep climbs.

I've never been to the Galtee's before so it was great to see a new area, though getting up both Galteebeg and Galteemore was certainly a challenge as the two summits had steeper sides then what Slievenamon would have to offer.

Conditions were great, although there was lots of snow it wasn't actually that cold which was also great as I was mad or stupid enough to do the run in shorts! I guess I don't like ruining my streak of  NOT wearing running tights for the past few years, to be honest I've always found tights far too warn as I generally getting pretty warm when running. 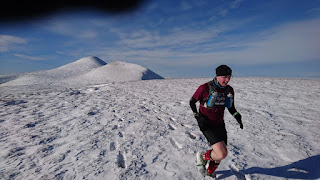 Only once or twice did I feel the cold and those times were when I stopped for a prolonged period, I was however lucky that the conditions didn't drastically change as I managed to loose my jacket as it fell through the netting on my Ultimate Direction pack which is an awful shame as that jacket got me through the Thames Path 100, Vartry 50 and Connemara 100 in the rain :(

Really felt it in the legs for a good 4-5 days after the trail run but it was seriously good fun and the views were great. Here's a Garmin log of the trial run.

As part of the run I brought alone my GoPro Session and put together a quick video which can be viewed here in 720p of by checking it out below.