It's being posted very late this year but welcome to another year in review, I actually didn't do that many races this year but it was still an interesting year and a year where I dug deeper then I ever needed to in a race before in my life.

2016 kicked off with me still being injured after the end of 2015, 2015 overall wasn't a good year for not being injured as after the Dublin Marathon in October I basically did little to no running...I didn't even manage to run the Waterford Half Marathon and I just barely managed the Stook 10mile.

But I was determined that 2016 would be different so I started off with a plan, this plan basically was running the Connemara 100 Ultra in August.
Back in the days when I first started running and I was doing coach to 5km I had learned about the Connemara 100 and I remember reading in awe about people running this distance non stop in such a beautiful part of the country, since then its always been a race I wanted to do and 2016 was going to be the year this would happen.


Initially my plan for 2016 was to do the Vartry 100mile in April and then do the Connemaera 100 in August but after being injured I decided to drop Vartry down to a 50mile distances to compensate for my loss of fitness while injured.

By February I was beginning to start to get back into the groove of doing "normal" training miles again which felt great as I did my first 20mile run at the end of February, the last 20mile being in  October 2015!

By the second week in March I did my first 30mile run of the year and then it was on wards and upwards to doing Vartry 50mile in April.

In May I started doing night runs on a Friday night after finishing work, I used this as a training method to get used to running 20-25miles when very tired and it was common for me to get back to my house at midnight after doing the 20-25mile run.  I found this new training method was useful because a) it got me used to running when tired and b) it allowed me to get my long slow run out of the way for the weekend :)

The start of June brought the annual Tullaroan race event and in 2016 they put on an Ultra for the first time. This basically consisted of 3x 13.1mile loops and it was an awful hot day to run such loops.

Although I experienced some very painful cramping at the 36mile mark I crossed the line in 6hrs, 3min in 4th place! (the nearest I've gotten to a podium finish!)

July for the most part was a wash out as I spent 2 weeks of it in Canada doing very little running and when I got back I started tapering for Connemara at the start of August so no more big miles anymore.

August finally came and it was time for the target race. It was a challenge and you can read all about it here. I had hoped to finish the race in under 24hrs and all went well until 86miles and then everything went out the finish and I was just thankful to finish it! 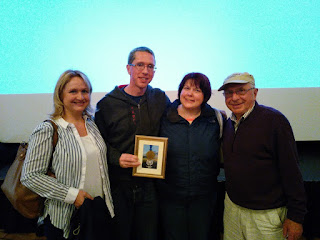 While I didn't get the time I wanted in Connemara the entire race was certainly an experience, not only did I have the support of my wife Grace but for the first time I also had the support of my family as they crewed for me. They got to see me at my lowest low which I'm sure was difficult at times. It was great to have them all at the finish line and I really appreciated all the support from all of them.

After Connemara 100 I foolishly took a break from running for two weeks which actually caused me more problems then anything as my muscles just seized up (I really need to remember to keep doing recovery runs!).    This resulted in dry needling to get things back to normal again.

October eventually rolled around and with only 2x 20mile runs under the belt I had already signed up for Dublin so I figured I better run it. But did I want to chance aiming to beat my previous Personal Best of 3:33:33 or do I just want to finish?

After Dublin I took it easy but I still managed to run Stook 10mile in November and Waterford Half-Marathon in December (neither of which were PB's) but I felt I finished the year in much better condition then at the end of 2015.

Well, I've only signed up for the Waterford Marathon in June, but I must say I'm very tempted to go back to Connemara for another re-match to see if I can finally break the 24hr mark!