This was my second running of the Connemara Ultra and I'd be lying if I didn't say I was abit nervous about it.

It was a early start on Sunday and I could hear the rain bucketing down outside.
A quick check of the weather forecast showed that the rain was due to clear around 10am for the rest of the day, so I figured at worst I'd have to put up with around 1hr of rain. Unfortunately as well as the rain there was also a strong breeze.

This year there were I believe around 250 ultra runners taking part, I think this is the largest  compared to previous years.  As always it was a mixed field from people that do these sort of distances as a training run, those that want to get the best time they can and finally just people that want to finish the course regardless of how long it may take them.

Just before the race start, the dark clouds broke for a few minutes and blue sky could be seen, this may have been for the briefest of moments but it was still a good sign, more importantly the rain stopped.....unfortunately the wind didn't so from the start (esp the 1st mile) we had to run into the wind.

This year I took a slightly different tactic to last year, the tactic being that I was going to take stuff on board much earlier.   So as well as taking on gels and water as normal I had planned to take on 3x 200ml bottles of flat coke from the 13mile, 26mile and 32mile drop bag stations.   I had other items packed into these bags just in case I might want them but in the end I didn't really bother with them.


I settled into a group of runners for the first 6miles or so but I noted after one or two miles that they had upped the pace from around 8:35 to 8:16min miles, as my overall target pace was supposed to be a average of 8:40 I dropped back from this group and ended up on my own on and off.

Fortunately unlike last year I picked up my 13mile drop bag as last year I was a good 500metres past it before I realised I had missed it, this may have been a factor for the problems experienced in the later part of last year's race.


After picking up my 13mile drop bag I slowed the pace a little more at this stage and took on my first fill of flat coke and one of those Aldi nutrigrain bars, these bars seemed like a good choice for the race but by the next drop bag at 26 I found them far too dry to eat.

Around mile 16 the wind started to hit again and the wind seemed to change direction every now and then which at times was frustrating, but at the same time when I was approaching the descend down into Leenane Village at around the 21-22mile mark the wind actually helped me get up a few of the hills as it gave me a bit of a push.


What was a real boost was the fact that I met the back of the marathon pack around mile 19 this year as opposed to mile 25 last year and during the descent into Leenane Village as I had the wind behind me I did one 7:18min mile and past a large number of marathon runners as well as a few ultra runners.  It was great to get support from the marathon runners, with many of them saying "go on Ultra" as I passed.

Doing these faster miles into Leenane had its downsides unfortunately and I could feel the start of some blisters just as I hit the 26mile bag drop so I walked for the first time in the entire race, my plan was to take on board some food and the flat coke and walk for the first mile coming up the hill from Leenane.


What I was surprised about this year is I managed to hit the marathon distance in 3hours 46min this year, this actually makes this my third fastest marathon and was far ahead of  last years time of 4hrs 11min.

I was also really surprised about how well I felt, especially compared to last year.   Since I started running I've had problems with my left IT band and this has affected me during so many races including Dublin, Portumna, Day 2 of the Clonakilty Back2Back and even last years Ultra where I was in agony from around mile 35 onwards due to it.

While I did feel the very odd bit of discomfort during this ultra mainly at the start it gave me no problems at all during the entire race, as well as that I was upbeat and my legs still felt relatively fresh (as long as I ignored the blister) :)

After refuelling on mile 27 I picked up the pace again and very comfortably passed a few other ultra runners as well as a large number of marathon runners, this was a massive boost and so I was able to keep up the pace. I did stop to walk a few times on hills but mostly I just kept on running.

At mile 32 I picked up my last drop bag and I had a quick drink of coke and left the rest of the stuff and I powered down the hill after the 32mile marker, after this point I just kept running to the hell of the west.

Coming up to the start of the hell of the west I felt surprisingly good for this late in the race, unfortunately that's when the wind started to hit me again and it just seemed to drain the energy out of me really quickly and I ended up slowing down alot.

The wind seemed to be gusting a lot, so while I might get 1min running the wind would gust again and I felt like I had to stop myself from being blown across the road.

I would have liked the last 2miles coming down to the finish to be nice and easy and without the wind it would have been a nice fast finish, unfortunately the wind kept up and I actually ended up walking once or twice on the last mile. I still did manage to finish across the line running so that's the important bit :)

This beats last years time of 6:29:21 by a whopping 37 minutes, considering my initial goal going into this race was to get sub6 and my ultimate goal was to get sub 5:40, I'm very happy with the results.


I've no doubt that if the wind wasn't an issue on the day I would have managed to easily reach the goal of 5:40. 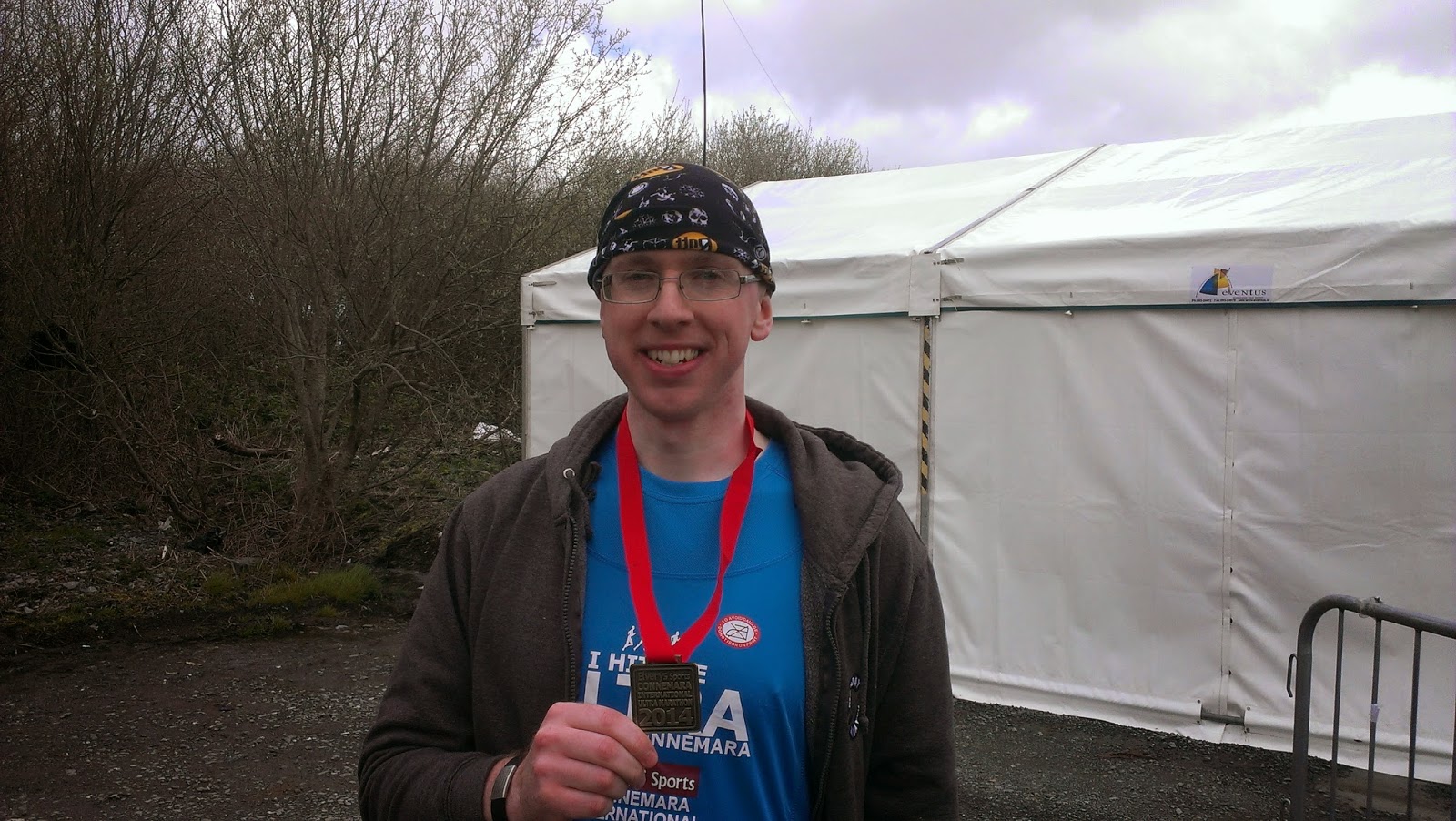 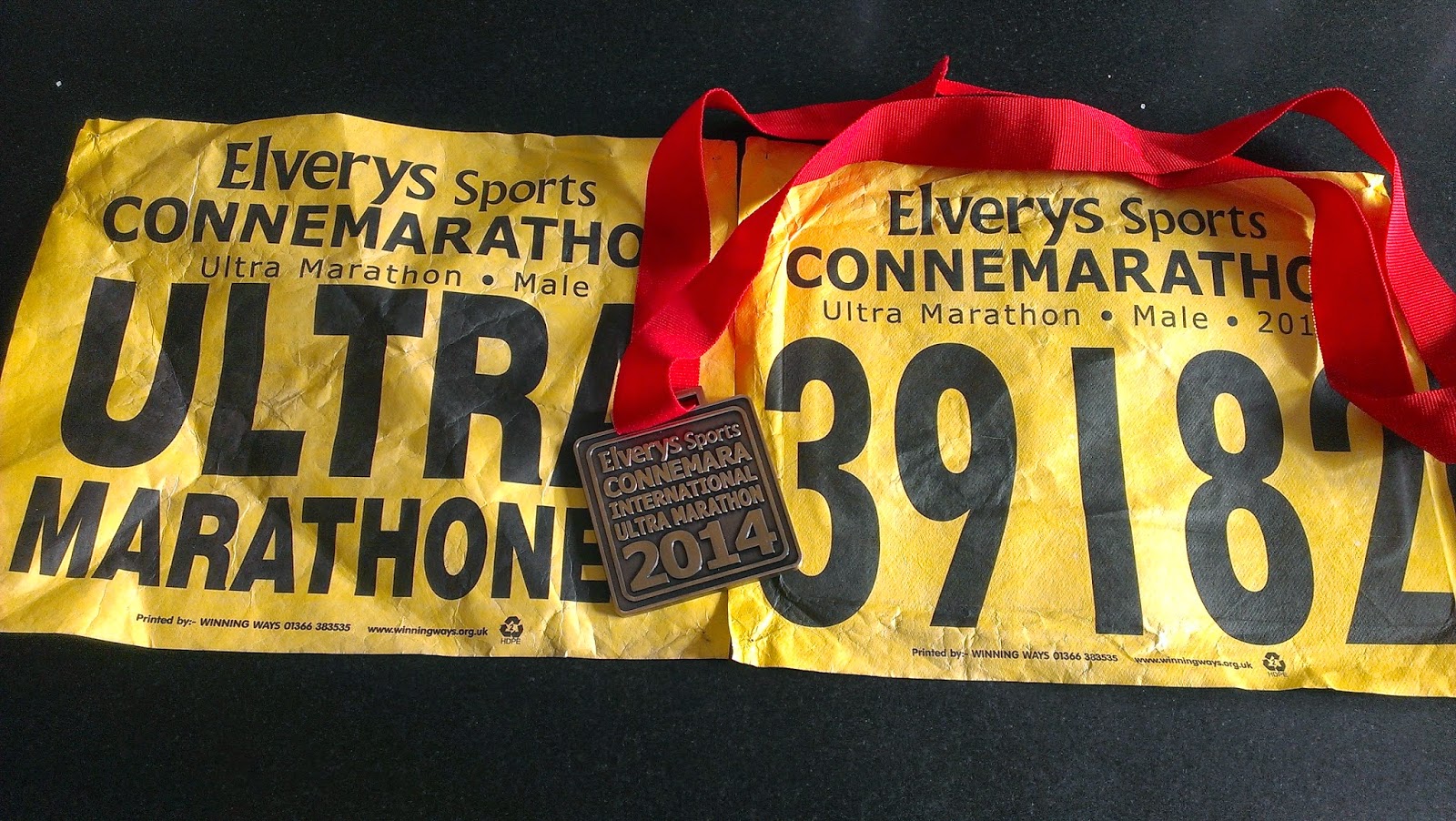 This is definitely one of my most enjoyable races I've done and I still can't get over how well I felt throughout, I'm actually very surprised as normally even in a marathon I have my moments where I just want to stop and walk now and then.

One aspect of the race I also thoroughly enjoyed was chatting to the other ultra runners and also the support from the marathon and half marathon runners, throughout the race from mile 8 onwards I also seemed to be leap frogging the same 6-8 ultra runners so it was good to chat to them now and then.

The aftermath is pretty good overall, the legs feel a bit stiff but other then that they feel perfectly fine, I've two blisters one on each foot which already are on the road to recovery.

I do however have two black nails (one of each foot) so I'll likely loose at least one toenail...but that doesn't hurt so I'm not too worried about that.  I hope to be back on the Ultra starting line next April :)