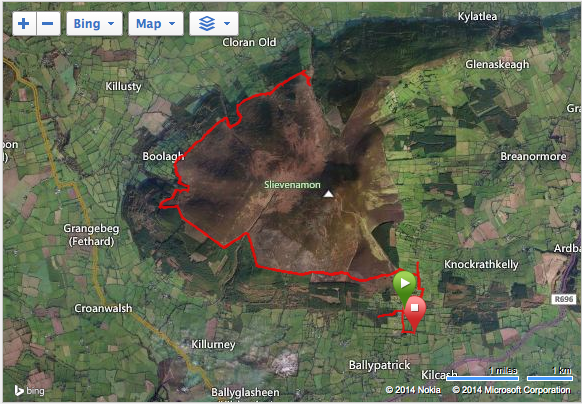 Last week I decided it was time to up the miles again with the aim of getting closer to mid to late 40's instead of once again having under 30miles done in the week. I'm wary of the drop in weekly miles as I need to start heading into training for the Thames Path 100 in May so more miles are badly needed.

On Tuesday I headed back to Slievenamon for my first 20mile trail run (Garmin link of route) on the mountain, this time I ran 10miles out and 10miles back along the loop rather then finishing the entire loop which is around the 17mile mark.

Very low cloud cover throughout most of the run and I must say I found the last 5miles hard going, without a doubt 20miles of trail where I need to leap from one rock to another or over boggy ground is far far harder then 20miles of road!

When I was at mile 19 I found the entrance to Kilcash wood which I never knew existed before, from what I can make out on Google maps this wood must have at least 7-8miles of trails in it. So that's something I plan to explore in future.

A quick search on the net however does bring some bad news about Kilcash woods, Coillte plan to clear the entire wood by 2016 and from what I observed on Tuesday they may have already started this as they were doing an awful lot of logging at the furthest end from Kilcash.

On Wednesday morning my legs felt awful heavy...but then I guess 20miles of leaping from rock to rock and over streams will do that, I still headed off for a very easy 5mile run.  After the run though I found my right ankle was bothering me and it hurt a bit.

As my ankle wasn't feeling any better on Thursday I decided on a rest day as I didn't want to chance making it worse by doing another run.  Come Friday I decided on a very easy 10mile run which started at 9:30min pace but I gradually upped the pace as the miles went on and the ankle wasn't bothering me, I finished the run with the last mile at 7:00min pace.

Overall its not been a bad week, but abit annoyed that I fecked my ankle abit on the Slievenamon run. But I suppose that's part and parcel of trail running and running on such rough terrain, it was just bound to happen at some stage.