Only a few runs lately but they are starting to feel easier, so recovery is getting there bit by bit, I even had a run this morning with some sub 6:50min miles.

I received two new pairs of runners last week, one for trail (Montrail Rogue Racer) and another for road ( Saucony Phoenix 7).

I was in very bad need of replacing the road shoes as the last pair had 1200+ miles in them at this stage.   I opted for new trail shoes because they were cheap and also I wanted a lighter non-gortex pair of trail shoes.

Why did I want non-gortex? Well, Thomas was right about encountering problems with them. While the first pair of trail shoes I bought are great for running through low streams, puddles etc.      Once water gets into them...it doesn't get out!  This can be seriously annoying if water gets into them early on in a run and you have miles and miles to go.

Last week I also picked up my first peice of running related stuff that I'm going to put on the wall in my house, I decided as Thames Path 100 was my first 100mile race that I'd frame the route map/t-shirt, race number and include the event and finish time on it.  Its due to take pride of place in my office at home. 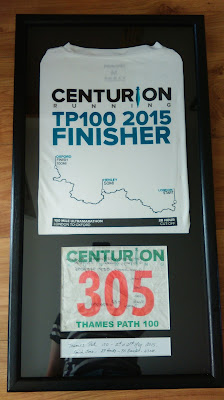