Trekking poles and back packs

So after a few days of short runs during last week after the moonlight marathon my legs finally started to feel less heavy and I managed a comfortable 8mile run on Friday morning.

On Sunday I decided to return to the trails as I really wanted to try out the trekking poles I got at the end of December and last week I also picked up a new backpack.

The poles I picked up were the Black Diamond Distance Carbon Z, normally fairly steep but I managed to get a very, very good discount which means I could justify going over my initial budget of €30 for trekking poles. 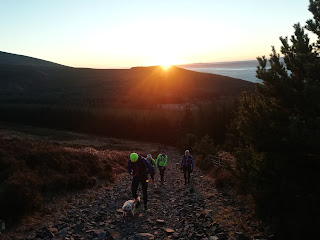 Sunday's trail run was a 7.30am start on Slievenamon with a group of us and one of the guys even brought his dog for the 12-mile run, it was -6c but the views were lovely, just stunning.   The route was the normal 12mile circuit of Slievenamon which mainly follows fire road around the base of the mountain, some bog and some open mountain.

Conditions on the circuit were very icy and the polls saved me from at least 2 or 3 falls on my arse, overall the polls certainly made any hilly sections easier but I was curious of just what benefits I'd find on the most difficult sections.

Specifically, I wanted to test the polls on a section called "Waterworks Hill", this is a very boggy section of the trail and its always slow going as its very uneven, your feet sink and its very wet.
But without a doubt the polls made it far easier, I set a new personal record of 12:58 beating my previous best of 17:07.   Of course, there is a caveat here, this section was frozen due to the cold temperatures so the ground was hard, I'll need to give it another test under proper wet and boggy conditions.

The next  real test of the poles on the route was the section we describe as "That f**ken wall!", this is the right-hand shoulder of Slievenamon at about mile 11 of the run and its a killer of a steep climb, by far the hardest section.  I set a new record for this section of 12min 19sec, beating my previous best of 12:21 also set with polls. Without polls, my best time was 14:24 so its clear the polls have a big a benefit in making upward progress.

Overall, it has been a positive experience and regardless of if they are in your hands or stored at the front of the pack, I can honestly say you'd hardly notice you have them due to the low weight. They also don't bounce which means they are not annoying to carry either.

As for the new Ultimate Direction pack, this is my second Ultimate direction pack.   I got my first Scott Jurek Ultra 2.0 pack back in October 2014 and its served me very well through hundreds of miles of training and races.

But, it does have a few issues. For starters, it has hard water bottles which aren't terribly comfortable and also as you drink your water the water sloshes around and this can get irritating while running.   Due to this, I had actually given up using the Ultimate Direction bottles in favour of reusing a normal water bottle which I'd crush down as I use the water in it, this stops it making noise.

By comparison, the Hardrocker vest comes with Ultimate Direction body bottles which are soft and shrink down as you drink your water, so this change is very much welcome.

The pocket selection at the back is also better, the Scott Jurek Ultra 2.0 had three large pockets but the Hardrocker has three large and one small, one of the large pockets is also open so its ideal for easily getting in/out a jacket without messing about with zips.

So far I'm very happy with the pack design and hopefully, it'll get years of use to come.